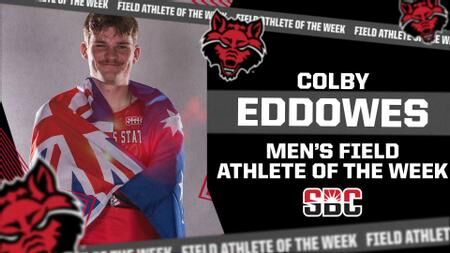 JONESBORO, Ark. (1/18/23) – After shattering the school record in the heptathlon in his first collegiate meet, Arkansas State track and field athlete Colby Eddowes was named the Sun Belt Conference’s first indoor men’s Field Athlete of the Week of the season, the league office announced Wednesday.

Eddowes made a splash in his A-State debut at the Boo Rogers Combined Events, held Dec. 9-10, in Pittsburg, Kan. The freshman set four personal bests in the seven events en route to breaking the school record in the heptathlon with a score of 5,703 points. His mark topped the previous record by 280 points.

His 60-meter hurdles time is tied for eighth-best in A-State indoor history, while his long jump mark is tied for ninth in the record books.

The Red Wolves return to action Friday and Saturday, competing in their first meet of 2023 in Nashville, Tenn., at the Vanderbilt Invitational.

Read more from the original source:
A-State’s Eddowes Dubbed SBC Men’s Field Athlete of the Week. Article may or may not reflect the views of KLEK 102.5 FM or The Voice of Arkansas Minority Advocacy Council