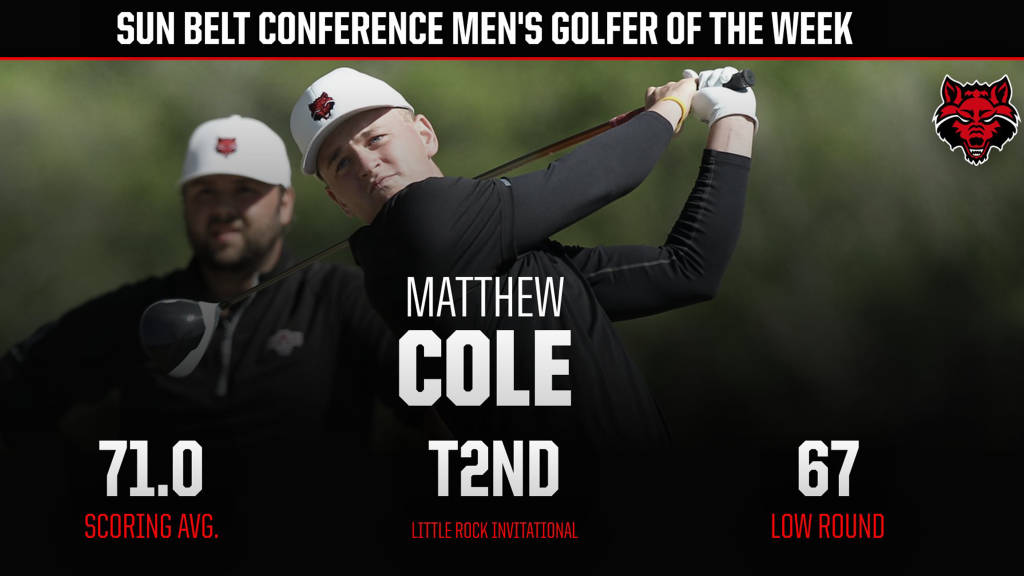 JONESBORO, Ark. (11/1/18) – Arkansas State junior Matthew Cole was named the Sun Belt Conference Men’s Golfer of the Week on Thursday, earning the recognition for the third time of his career.

The latest recognition for Cole comes after he collected his best finish of the season at the Little Rock Invitational, where he tied for second place among 90 players to lead Arkansas State to the tournament championship over teams such as No. 25 UNLV and Sun Belt Conference members Little Rock, ULM, Texas State and UT Arlington.

The Fayetteville, Ark., native shot a 3-under-par 213 (77-67-69), which was his lowest three-round score of the year. His combined total included his two lowest single-round scores of the season with a 67 and 69 for the second and third rounds, respectively.

Cole, who picked up his fourth career top-10 finish, was also named the Sun Belt Conference Men’s Golfer of the Week once as both a sophomore and freshman.

A-State concluded the fall portion of its schedule at the Little Rock Invitational Oct. 22-23 and is currently ranked among the top-25 teams in the nation by Golfweek (20) and Golfstat (24) and in the Bushnell Golfweek Coaches Poll (23).

The Red Wolves return to action Feb. 24-26 at the Tiger Invitational in Opelika, Ala.

Original article source: http://www.astateredwolves.com//ViewArticle.dbml?DB_OEM_ID=7200&ATCLID=211778638 | Article may or may not reflect the views of KLEK 102.5 FM or The Voice of Arkansas Minority Advocacy Council