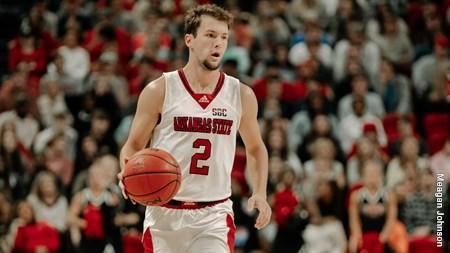 Felts was one of three A-State players scoring in double figures, joined by senior Markise Davis and sophomore Julian Lual with 14 points each.  The Red Wolves posted a .563 shooting percentage as they began their season with a victory for the second straight year, marking the first time since 2004-05 and 2005-06 they won back-to-back season openers.

A-State also outrebounded Harding 40-30 and finished with 29 assists that were only one shy of the arena record.  Defensively, the Red Wolves limited the Bison to a .375 mark from the field, tallied 15 steals and scored 19 points off turnovers.

The Red Wolves fell behind by a 24-14 score 12 minutes into the contest, but closed the first half on a 26-4 run and outscored the Bison 46-27 in the second half.  Twelve different A-State players saw time on the court, including 10 who registered at least 10 minutes of action.

Leading 40-28 at the break, Arkansas State scored 36 of the first 43 second-half points as its lead swelled to 76-35 with 7:38 left in the game.  The Red Wolves matched their largest lead of 41 points a few minutes later before going on to the 31-point victory.

In addition to his 14 points, Davis tallied a career-high four steals while adding five rebounds and two assists.  Forward Omar El-Shiekh was responsible for a team-high eight rebounds to go along with nine points and three steals.

Arkansas State returns to action Saturday, Nov. 12, with a 5:00 p.m. game at LSU.  The contest will appear on SEC Network+, and every A-State men’s basketball game can be heard live on the EAB Red Wolves Sports Network, including flagship station 107.9 FM in the Northeast Arkansas area. For the latest on A-State men’s basketball, follow the team on Twitter (@AStateMB), Facebook (/AStateMB) and Instagram (@astatemb).

Read more here:
A-State Wins Season Opener 86-55 Over Harding. Article may or may not reflect the views of KLEK 102.5 FM or The Voice of Arkansas Minority Advocacy Council