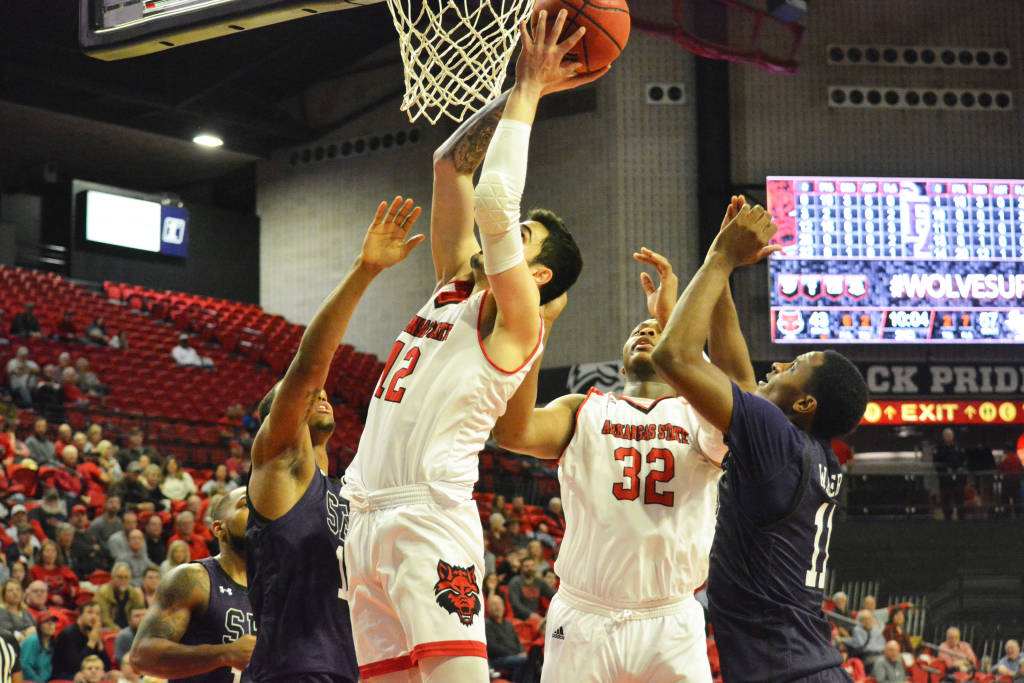 The Red Wolves (5-2) saw three players score in double figures and trailed the Lumberjacks just 30-27 at halftime, but they couldn’t overcome a strong second-half start by the Lumberjacks (6-1).

SFA, which outscored Arkansas State 48-20 in the paint, finished the game with a .500 field goal percentage in comparison to the Red Wolves’ .283 mark from the field.  The Lumberjacks also held a slight 42-38 advantage on the boards and took advantage of 11 steals to help it score 18 points off turnovers.

A-State built a 22-14 lead, its largest of the outing, 13 minutes into the contest and didn’t trail until late in the first half.  SFA responded to the eight-point deficit with a 16-5 run to close the opening period with a 30-27 advantage.

The Lumberjacks then opened the second half by scoring the first 12 points to increase the margin to 42-27 with 17:19 remaining in the game. The Red Wolves were able to pull back within 49-42 just over four minutes later, but couldn’t get any closer.

“The game came down to about six possessions to start the second half,” said A-State head coach Mike Balado.  “They made some tough shots, but we have to a better job.  Everybody is going to look and say we lost this game on offense with the way we shot the ball, but the truth of the matter is they shot 50 percent for the game, so we didn’t guard the way we’re supposed to guard.  They’re a good team and very well coached.  They’ll play in the NCAA Tournament, and those are the teams you’ve got to beat.”

SFA was led by two players reaching double figures in the scoring column, including Kevon Harris with a game-high 22 points and Gavin Kensmil with 20.  Kensmil also pulled down a game-high 15 rebounds to collect a double-double.

Arkansas State remains at home for its next game, hosting Omaha Tuesday, Dec. 3, in a 7:00 p.m. outing at First National Bank Arena.

Original article source: http://www.astateredwolves.com//ViewArticle.dbml?DB_OEM_ID=7200&ATCLID=211816603 | Article may or may not reflect the views of KLEK 102.5 FM or The Voice of Arkansas Minority Advocacy Council