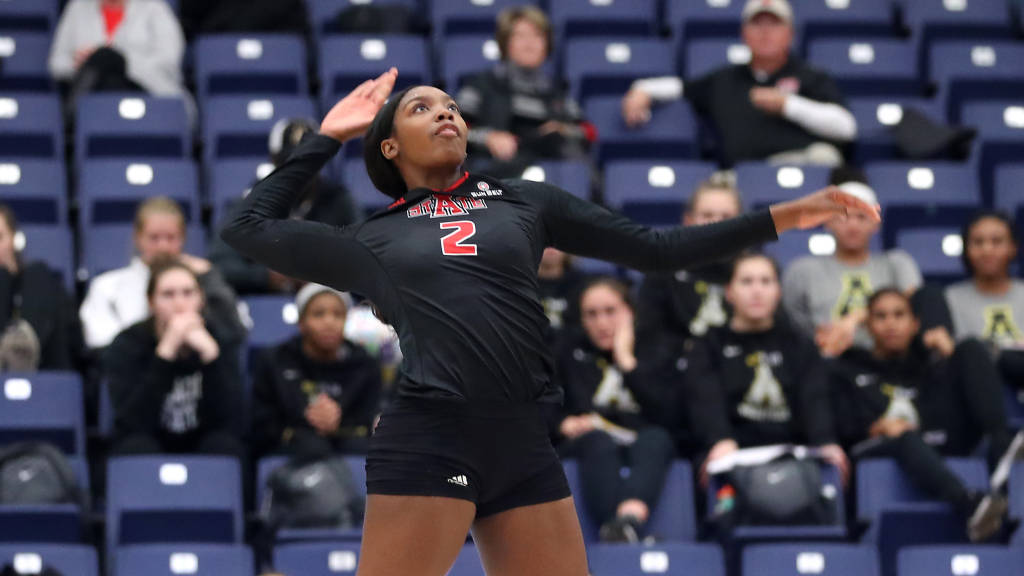 With the win, the Red Wolves will advance to the semifinals to face No. 2 Appalachian State.

“It has to be someone different every night and tonight it was Madison and Isabel Theut that really stepped up,” said A-State head coach David Rehr. “Madison is really becoming that junior presence on the court for us.

A-State jumped out to an early 3-0 lead on back-to-back kills by May and a service ace by Putt. The Red Wolves extended their lead 15-8 when they went on a 5-0 scoring run led by Putt and Isabel Theut. A-State pushed its advantage when it when it went up 23-17 on a kill by Putt. Momentum stayed with the Red Wolves when they took the match 25-17.

The Red Wolves rallied in the second set when they went on a 4-0 scoring run led by Theut and Josie Standford to push their advantage 10-6, ultimately forcing a Chanticleer timeout. Resuming action, Madison Turner earned back-to-back blocks to put A-State ahead 15-10. A-State pulled away 18-12, its largest lead of the night on a kill by May. Scarlet and Black never let up on the Chanticleers when it took the set 25-15.

“We knew in game three that this was going to turn into an offensive match and we needed our defense just to give us a few stops. Carlisa had a huge block for us in game 4 and we were able to hold off their attack long enough to come out with a win,” said Rehr.

Both teams battled it out in the fourth set when the match was tied 11 times, however the Chanticleers pulled ahead 15-14 on a kill by Anett Nemeth. The Red Wolves rallied when they went on a 3-0 scoring run to take a 16-15 lead and to force a Coastal Carolina timeout. A-State pushed its advantage when it went up 23-19 on back-to-back kills by May. The Red Wolves didn’t lessen their aggressive offense when they took the set 25-20 on a kill by May.

A-State is set to host No. 2 Appalachian State Saturday, Nov 17 in the semifinals of the SBC Tournament at GSU Sports Complex. The first serve is set for 1:30 p.m.

Original article source: http://www.astateredwolves.com//ViewArticle.dbml?DB_OEM_ID=7200&ATCLID=211780990 | Article may or may not reflect the views of KLEK 102.5 FM or The Voice of Arkansas Minority Advocacy Council