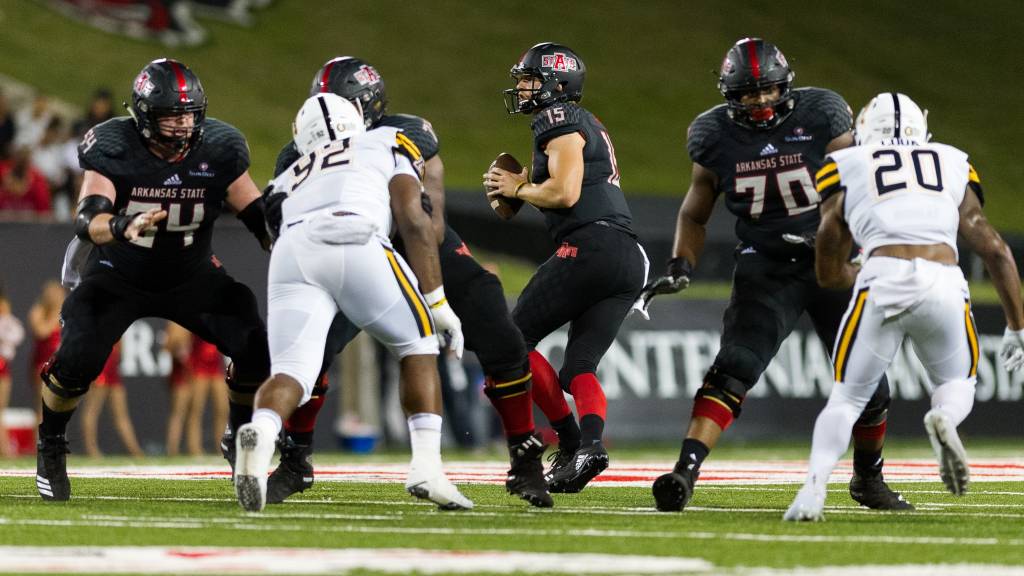 Appalachian State (4-1, 2-0 Sun Belt) racked up 390 total yards behind 246 yards on the ground while forcing three A-State (3-3, 0-2 Sun Belt) turnovers and limiting the Red Wolves to 3-of-17 on third down. Thirteen of the Red Wolves’ 16 drives consisted of five or fewer plays, but the Red Wolves amassed 336 yards of offense with 219 yards coming in the aerial attack.

“I am obviously disappointed in how we played and it is real simple; we are not playing good football right now and that falls on me,” said A-State head coach Blake Anderson. “We have to find some consistency and balance, and we have not played well this season yet. Offensively, we move the ball, but we can’t finish while defensively we’ve got to make them kick field goals and create some turnovers. Those things aren’t happening consistently in any of those phases.”

Blake Grupe connected on three field goals in the first half, the first two staking the Red Wolves to a 6-0 lead. His second field goal was a career long 47-yard boot.  Appalachian State grabbed a 7-6 advantage on a 26-yard touchdown scamper, but Grupe put his third FG attempt through the uprights as A-State regained the lead at 9-7 with 4:37 to play in the half. The Mountaineers answered with a four-play, 74-yard drive to lead 14-7 with 2:57 to go in the half.

Appalachian State picked off two passes in the last four minutes of the half, the first of which set up the Mountaineers inside the A-State five yard line. Appalachian State expanded the advantage to 21-9 with a one-yard touchdown scamper and the second pick ended the Red Wolves chances of a score before the halftime break.

A-State hosts Georgia State on Thursday, October 18 at 6:30 p.m. in a nationally-televised contest on ESPNU. Tickets may be purchased through the A-State Ticket Office, located at the First National Bank Arena lower red entrance, in person, by phone at 870-972-2781 or online by visiting AStateRedWolves.com/Tickets.

Original article source: http://www.astateredwolves.com//ViewArticle.dbml?DB_OEM_ID=7200&ATCLID=211775403 | Article may or may not reflect the views of KLEK 102.5 FM or The Voice of Arkansas Minority Advocacy Council