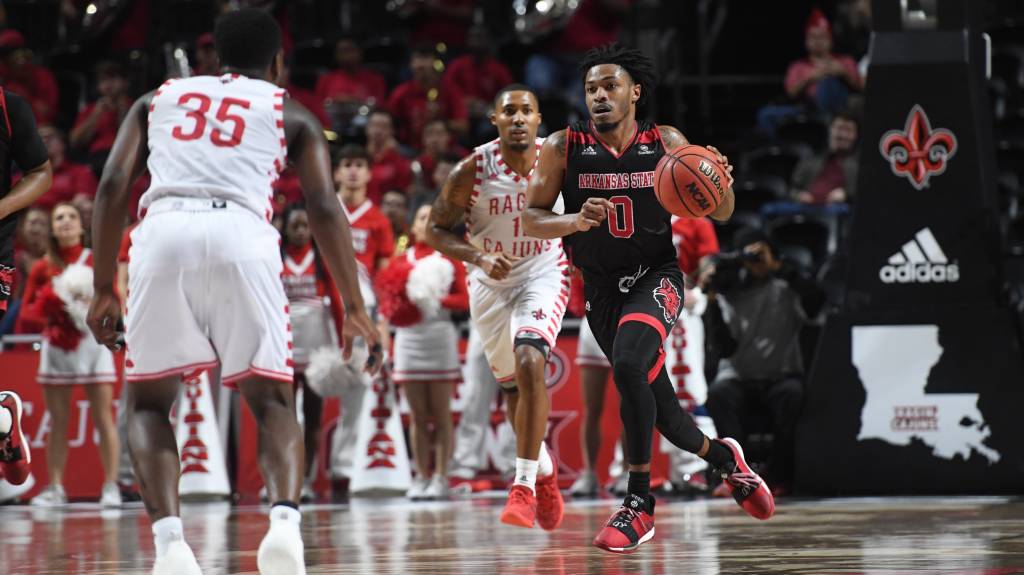 MONROE, La. (1/5/19) – The Arkansas State men’s basketball team saw ULM race to a 24-8 lead and could not recover in a 85-75 loss to the Warhawks at Fant-Ewing Coliseum Saturday afternoon.

“I was concerned about our energy coming into this game following the win Thursday at Louisiana,” said head coach Mike Balado. “That was such an emotional game on Thursday, but just like losses, you have to put it to bed. You have to give ULM credit, because that is the best ULM team I’ve seen. They beat us up pretty good in the first half and I told our guys at halftime, you can’t spot a team 19 points on the road and expect to win. ULM played really well and we did not come ready to play.”

ULM scored the first eight points of the game and nailed 6-of-11 from 3-point range to open an early 24-8 advantage. A-State got to within 24-12, but the Warhawks stretched their lead to as many as 19 points late in the half. Eaton drained a 3-pointer just ahead of the halftime buzzer to see the Red Wolves trail 48-32 at the break.

A 24-8 spurt saw the Red Wolves cut the deficit to 56-53 with 9:31 to play, but ULM answered with a 7-0 run to regain a double-digit advantage. A-State answered back with the next six points, but ULM did not allow the Red Wolves to get closer than four the remainder of the game. The Warhawks knocked down 15-of-18 (83 percent) at the charity stripe in the second half to hold off the furious rally by the Red Wolves.

“We came out in the second half and played Arkansas State basketball,” said Balado. “ULM shot 35 percent and hit two 3-pointers in the second half. That’s the way the game should’ve started. I don’t think we came out with the energy I expected us too. Our team is still learning and the success will come. This was a good learning experience. Winning on the road in this league is extremely tough, but our guys have to learn that to be champions you have to come ready to play every game.”

After being out-rebounded 20-11 in the first half, A-State won the boards 21-13 in the second half to finish with a 33-32 deficit on the glass. The Red Wolves held a 32-26 advantage in the paint and a 21-2 edge in scoring off the bench. ULM held a 17-10 advantage in points off turnovers with A-State committed 13 turnovers to the Warhawks seven.

“I’m happy with the win back on Thursday, but for us to get where we want to be and change the culture and expectations of this program, these are the games we need to win,” said Balado. “To be champions, you have to be one of the best road teams in the league. We have to learn to do a better job of being prepared mentally. The win Thursday was great and this ULM team is a very good team, but I thought we played a very good final 20 minutes. We’ve got to fix those first 20 minutes and come in with more energy and be ready to go.”

A-State returns to First National Bank Arena to host South Alabama Thursday at 7:00 p.m. in a game available on ESPN+. For the latest on A-State men’s basketball, follow the Red Wolves on Twitter @AStateMB, at Facebook.com/AStateMB and on Instagram at ‘AStateMB’.

Original article source: http://www.astateredwolves.com//ViewArticle.dbml?DB_OEM_ID=7200&ATCLID=211785678 | Article may or may not reflect the views of KLEK 102.5 FM or The Voice of Arkansas Minority Advocacy Council