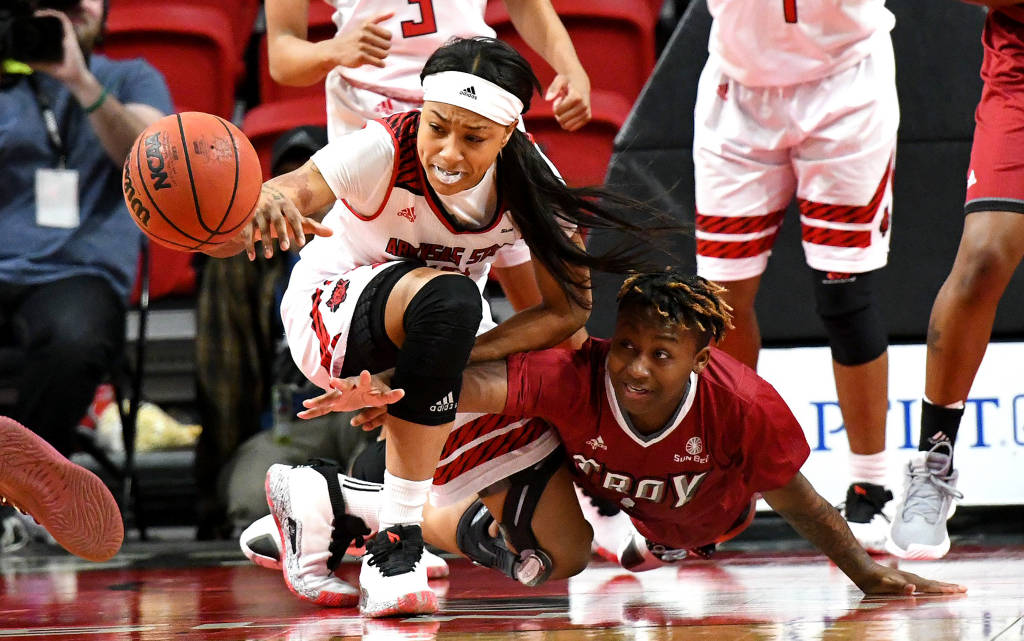 JONESBORO, Ark. (2/9/19) – The Arkansas State women’s basketball team had five players score at least 13 points, including sophomore guard Morgan Wallace with a double-double, but it wasn’t enough to overcome a Troy squad that connected on 14-of-27 three pointers as the Red Wolves fell 100-89 in Sun Belt action Saturday at First National Bank Arena.

With the setback, A-State now stands 9-13 overall and 4-7 in league play.  Troy remained near the top of the Sun Belt standings as it improved to 8-3 against conference opponents, and the Trojans also improved to 17-5 overall.

Peyton Martin posted a game-high 17 points to pace the Red Wolves’ offensive attack, which also saw Jireh Washington, Wallace and Akasha Westbrook score 16 each.  Jada Ford added 13 points for the Red Wolves as they had five players reach double digits for the second straight outing and third time this year.

A-State connected on a season-high 49.2 percent of its shots, and its 89 points were its most in regulation this year, but Troy countered with a 51.9 three-point percentage that was actually higher than its overall 43.0 mark from the field.  The Trojans’ 14 three pointers were one shy of tying the arena record currently held by the Red Wolves.

“Troy did what they do best today and got the game into their pace, forced 23 turnovers and just had an incredible shooting day,” A-State head coach Brian Boyer said.  “It just seemed like every time we had a chance to cut into the lead they just hit big shots.”

Arkansas State held a narrow 44-42 advantage on the boards and made seven more free throws than Troy, but was hurt by 23 turnovers the Trojans turned into 26 points.

Rallying from 13 points down in the third quarter, the Red Wolves pulled to within 70-69 of the Trojans early in the fourth following a Ford three pointer that was one of four made on the day by the squad.

However, Troy went on a 13-0 run over the next three minutes to open up its largest lead of the contest at 83-69 with 7:34 remaining.   Arkansas State was able to get back within six points of Troy two different times down the stretch, but couldn’t get any closer.

“We had to many times today where we felt like we were in reach, but just had some costly turnovers during that stretch and we could never get ourselves up over the hump,” Boyer said.

A-State held a brief lead on two different occasions in the first period, but Troy wouldn’t trail again after taking an 8-7 advantage just over five minutes into the game.  The game was tied 33-33 with 5:25 left in the second quarter before the Trojans entered the break ahead 53-42.

Wallace posted 11 rebounds to tie the most of her career, and her double-double was her third this season.  Washington not only finished with a career-best points total, but also tied her career high for assists with six.

Troy also had five players score in double figures, including Kayla Robinson with a team-high 16 points.  Three of the Trojans’ five players reaching at least 11 points came off the bench as their reserves scored 58 of the team’s 100 total points.

Original article source: http://www.astateredwolves.com//ViewArticle.dbml?DB_OEM_ID=7200&ATCLID=211790050 | Article may or may not reflect the views of KLEK 102.5 FM or The Voice of Arkansas Minority Advocacy Council