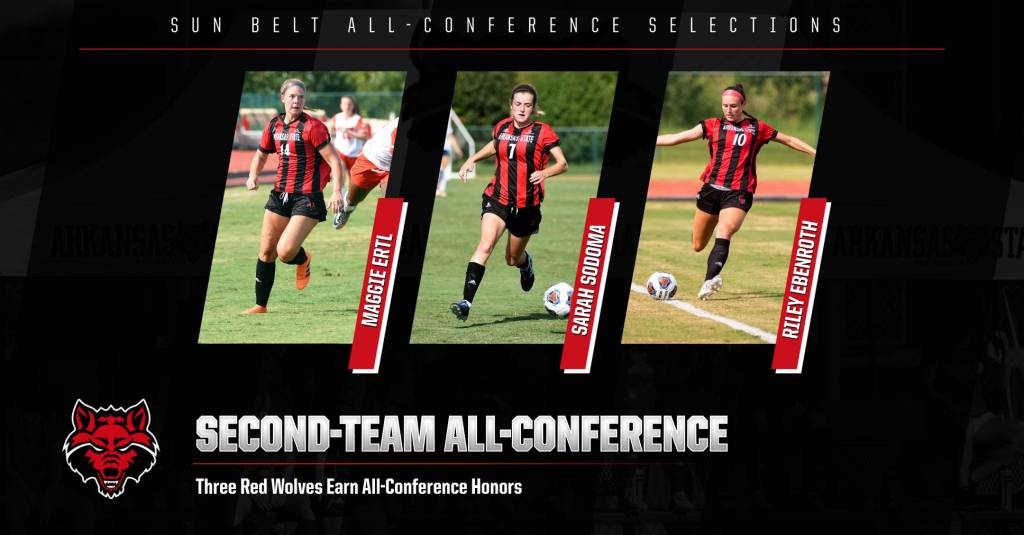 Maggie Ertl, Sarah Sodoma and Riley Ebenroth have all been named Second-Team All-Conference after helping the Red Wolves reach the Sun Belt Conference Championship tournament for the third straight year. Sodoma and Ebenroth each appeared on the league’s second-team in 2017, while this marks the first year-end award for Ertl.

Ertl led the conference with seven assists on the year and also held the top spot with 0.41 assists per game. She also ranked fourth with points and averaged 0.88 points per game, which also was fourth in the league’s rankings. Her four goals were tied for the seventh most among all SBC players, while she was also the only player in to register a multi-assist game twice.

Sodoma led A-State with five goals on the year, which tied for the fourth most among the league’s leaders. Her 10 points were tied for second-most on the Red Wolves and ranked 10th in the league, while the Manchester, Mo., native’s three goals against Sun Belt opponents also placed her among the top scorers.

Ebenroth was the defensive leader on one of the league’s most dominant back lines in 2018. A-State allowed just 20 goals on the season and ranked fourth in the league with a 1.13 goals against average. The team posted four shutouts and collected 78 saves, not including numerous shot attempts that were blocked before reaching the goalkeeper.

The St. Louis, Mo., native also provided a spark on offense and scored two goals, each in dramatic fashion. She scored the first goal of her A-State career against UT-Martin on Aug. 16 on a free kick from 20-plus yards out and then scored with 14 seconds to go against Appalachian State on Oct. 20 to send the match into overtime that also resulted in an Arkansas State victory.

The No. 7 Red Wolves will take on No. 2 Little Rock in the opening round of the Sun Belt Conference Championship tournament, Wednesday, Oct. 31 at 4 p.m. The match will air on ESPN+.

Original article source: http://www.astateredwolves.com//ViewArticle.dbml?DB_OEM_ID=7200&ATCLID=211778171 | Article may or may not reflect the views of KLEK 102.5 FM or The Voice of Arkansas Minority Advocacy Council