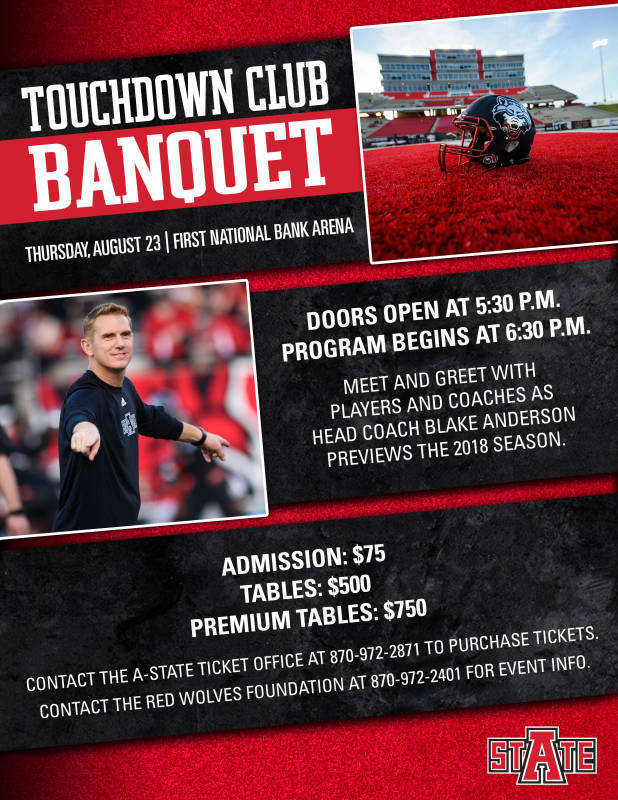 Just nine days prior to the A-State football team’s 2018 season opener at Centennial Bank Stadium against Southeast Missouri, Red Wolves’ fans will have the opportunity to hear exclusive insight from head coach Blake Anderson about the team, its fall camp and upcoming season.

Out of 30 all-time head coaches, Anderson became just the fourth to win at least seven games in his first season at A-State. Now with 31 career victories leading the Red Wolves, he is the first head coach in A-State history to win more than 22 games in his first four seasons at the school. Additionally, Anderson is just the third head coach at A-State to direct the program to 31 wins in 51 or fewer games – Bennie Ellender reached 31 victories in 50 games from 1963-68, as did Bill Davidson from 1971-75.

The entire 2018 A-State football team will be in attendance and participate in an autograph and photo opportunity with fans. A live auction will also take place. Individual tickets are available for $75 each, which includes a dinner.

Tables, which seat eight individuals, may also be purchased at $500 or $750 each. Members of the A-State football team will be placed at various tables based upon availability. Tickets may be obtained by contacting the A-State Ticket Office at 870-972-2781.

The Red Wolves reported for fall camp Aug. 2 and held their first practice a day later. A-State has been tabbed as the No. 25 team in the nation in Phil Steele’s preseason top-25, and was also picked to win the Sun Belt Conference for the first time in the history of the league’s preseason coaches’ poll. A-State tied fellow Sun Belt Conference member Troy for the most points by a team in league history in the preseason Amway Coaches Poll.

Arkansas State will kickoff its 2018 campaign Sept. 1 at Centennial Bank Stadium with a 6 p.m. game against Southeast Missouri. Season tickets can be purchased through the A-State Ticket Office, located at First National Bank Arena’s lower red entrance, in person, by phone at 870-972-2781 or online by visiting AStateRedWolves.com/Tickets.

Original article source: http://www.astateredwolves.com//ViewArticle.dbml?DB_OEM_ID=7200&ATCLID=211767367 | Article may or may not reflect the views of KLEK 102.5 FM or The Voice of Arkansas Minority Advocacy Council