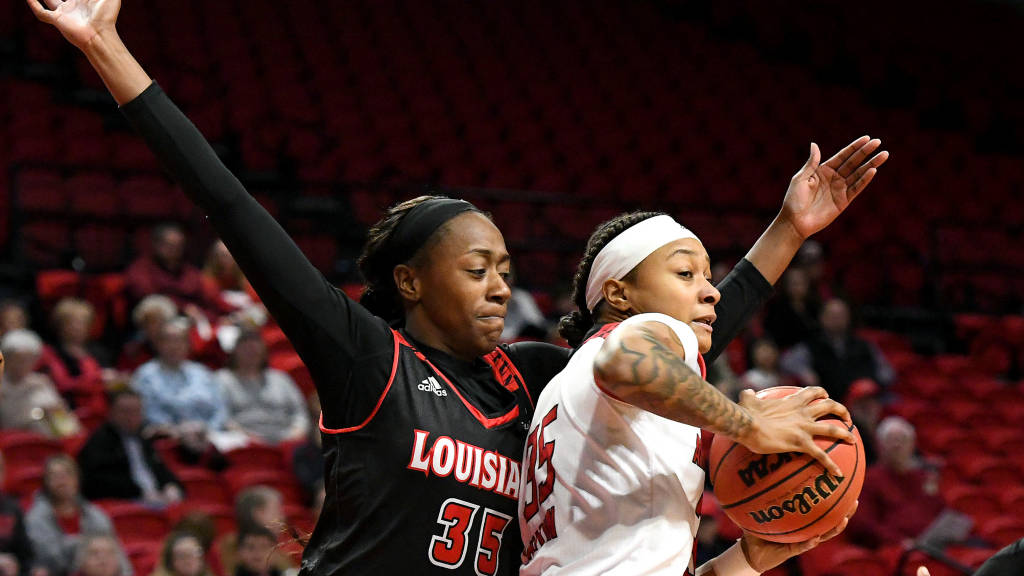 The Red Wolves evened their overall record at 6-6 and ran their home record to 5-1, while also improving to 16-12 in all-time Sun Belt openers.  A-State snapped a four-game skid against Louisiana, which saw its record drop to 2-10 on the year.

“I thought it was good win and I think the phase grinding it out comes to mind in this one,” A-State head coach Brian Boyer said. “I thought we did a good job of sticking with it and not getting rattled when they would hit some shots to close the gap a little bit.”

Martin finished just two points shy of her career-best total with a game-high 25 points, while also pulling down 10 rebounds to pick up her second double-double of the season.  Wallace scored 13 points and also grabbed 10 boards to give her two career games with double-digit points and rebounds.  Tonight’s game marked the second time this year the Red Wolves had two players with a double-double in the same contest.

Also reaching double figures in the scoring column for A-State were Jireh Washington and Akasha Westbrook with 15 and 10 points, respectively.

“Late in the game Jireh and Morgan were really good against the press,” Boyer said. “I thought at times maybe we should have backed it out, but they were so sure of their decisions to get layups that they really turned their press into an advantage for us.”

The Red Wolves shot 48 percent from the field in comparison to the Ragin’ Cajuns .409 mark, while also hitting 21-of-25 free throws (84.0 percent) and holding a slight advantage on the boards at 38-37.  The home squad, which got 30 points from its bench, also scored 32 fast-break points that are the most during the Brian Boyer era.

Arkansas State didn’t take its first lead until Martin hit a pair of free throws with 3:23 left in the first quarter to make the score 12-10.  The Red Wolves wouldn’t trail the remainder of the game as it went on to outscore the Ragin’ Cajuns in every period but the third, which saw both teams put 22 points on the scoreboard.

A-State took a 41-35 lead into the break and while its largest lead was 12 points late in the fourth quarter, it held at least a two-possession advantage throughout the majority of the second half.

Original article source: http://www.astateredwolves.com//ViewArticle.dbml?DB_OEM_ID=7200&ATCLID=211785541 | Article may or may not reflect the views of KLEK 102.5 FM or The Voice of Arkansas Minority Advocacy Council