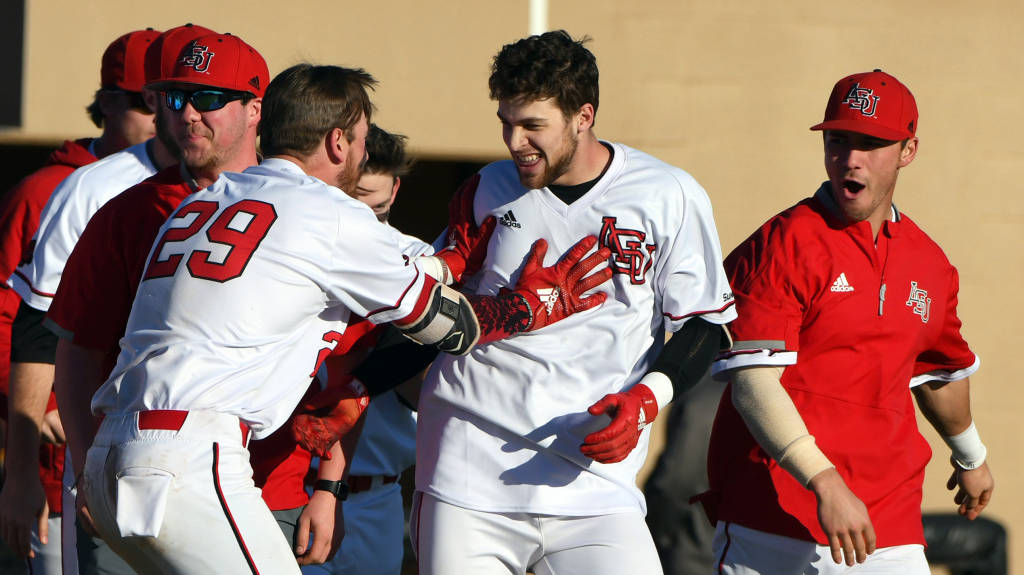 JONESBORO, Ark. (2/24/19) – Alex Howard’s walk-off home run in the bottom of the eleventh inning propelled Arkansas State to a 7-6 victory in game one of a doubleheader Sunday afternoon at Tomlinson Stadium. The Red Wolves also won game two by a score of 7-1.

Howard finished the first game 3-for-4 with two home runs and four RBIs. His solo home run in the eleventh inning sent the Red Wolves (4-2) away winners after erasing a three-run deficit early in the game and then rallying again in the ninth inning to send the game into extra innings.

A-State scored four runs in the seventh inning to go up 5-4 after Howard sent a two-run blast over the leftfield wall and Sky-Lar Culver followed with a two-run shot of his own.

The Crusaders (1-3) took the lead back in the eighth inning with a two-run home run by Blake Billinger, his second of the game.

A-State rallied again in the ninth inning when Howard reached on a hit-by-pitch and Kyle MacDonald followed with an RBI double into center field to tie the game at 6-6. MacDonald, who represented the winning run, later advanced to third on a wild pitch but was left stranded to send the game into extra innings.

Zach Jackson gave up four runs on hits before giving way to Zech Jarrard who pitched three innings and surrendered two runs on two hits. Kollin Stone picked up the win after pitching both the 10th and 11th innings.

In game two, the Red Wolves jumped out to an early lead with runs in the first and second innings. Culver provided an RBI single down the right field line in the first inning and Jake Karst launched his first home run of the season with a solo shot to left to go up 2-0.

Arkansas State added to its lead in the fifth inning when Culver drove in Howard on an RBI single up the middle and Tyler Duncan followed later in the inning with a two-run single to push the advantage to 5-1.  Culver finished the second game 2-for-3 with two RBIs, while Duncan also finished with two RBIs.

Junior pitcher Chandler Coates turned in his second quality start of the season after allowing just one run on four hits in six innings of work.  MacDonald drove in a run in the sixth inning and Justin Felix rounded out the scoring with a bases loaded walk in the inning.

Arkansas State will go for the sweep Monday afternoon. First-pitch is set for Noon at Tomlinson Stadium.

Original article source: http://www.astateredwolves.com//ViewArticle.dbml?DB_OEM_ID=7200&ATCLID=211792473 | Article may or may not reflect the views of KLEK 102.5 FM or The Voice of Arkansas Minority Advocacy Council