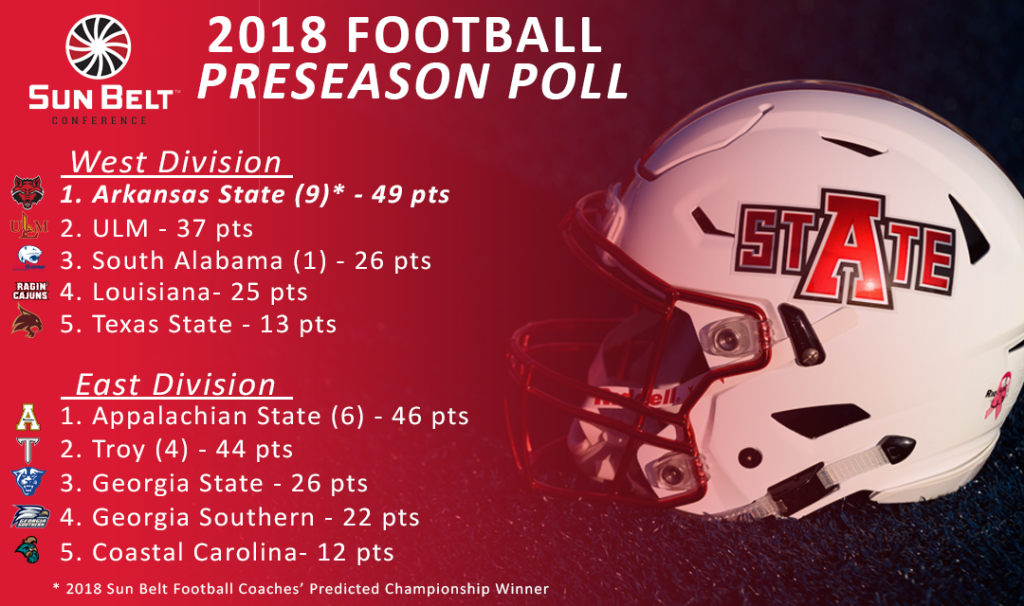 JONESBORO, Ark. (7/19/18) – With the Sun Belt Conference’s annual Football Media Day set for Monday, July 23, the league announced its 2018 Preseason Coaches’ Poll Thursday, and five-time SBC champ Arkansas State was picked as the favorite to win both the West Division and the conference’s inaugural championship game.

While the Red Wolves were previously picked to finish runner-up five times, including 2006, 2009, 2012, 2014 and 2016, the 2018 version of the poll marks the first time they have ever been predicted to win the Sun Belt Conference championship.

A-State received nine of the 10 first-place votes to win the West Division and accumulated 49 points. ULM was chosen to finish runner-up in the division with 37 points and followed by South Alabama (1 first-place vote, 26 points), Louisiana (25 points) and Texas State (13 points).

Blake Anderson returns for his fifth season as head coach with a 26-6 Sun Belt Conference record, giving him an .813 winning percentage that ranks second all-time in league history among head coaches who spent at least three years leading a team in the conference. Additionally, his 26 Sun Belt victories are the sixth most ever by any head coach and he enters 2018 six wins behind Rick Stockstill, who coached Middle Tennessee from 2006-12, for second place on the list.

Arkansas State is set to open its 2018 season Sept. 1 with a 6:00 p.m. kickoff at Centennial Bank Stadium against Southeast Missouri State. Season tickets, which includes six home games, are available for purchase through the A-State Ticket office, located at First National Bank Arena’s lower red entrance, in person, by phone at 870-972-2781 or online by visiting AStateRedWolves.com/Tickets.

Original article source: http://www.astateredwolves.com//ViewArticle.dbml?DB_OEM_ID=7200&ATCLID=211735592 | Article may or may not reflect the views of KLEK 102.5 FM or The Voice of Arkansas Minority Advocacy Council