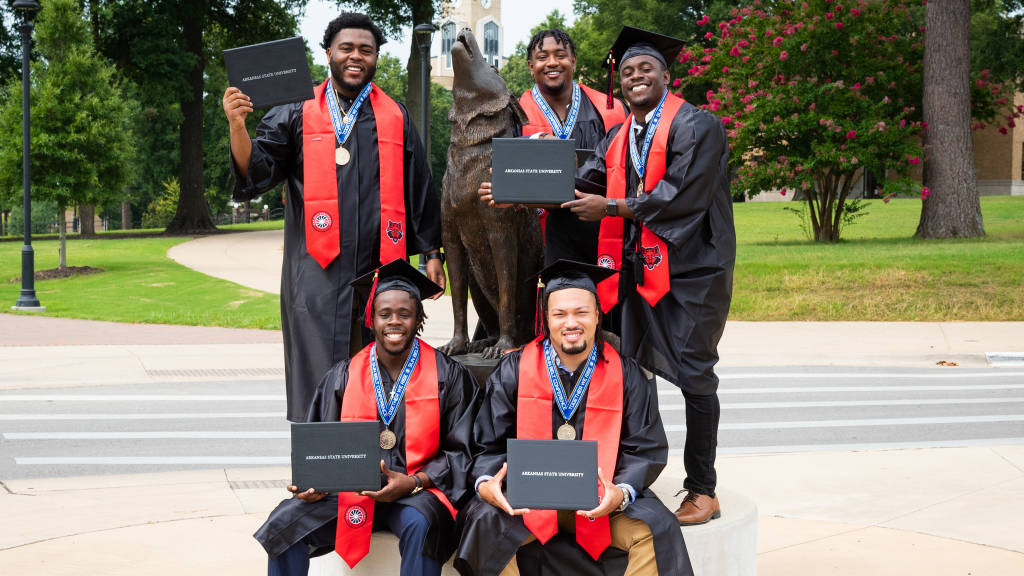 They join Oma Bayless, Tajhea Chambers, Carson Coats, Dahu Green, Darreon Jackson, Kirk Louis, Kirk Merritt and Nour-Eddine Seidnaly to give the Red Wolves their most graduates on their roster to begin a season since at least 2009.

Payton Lannon, a senior pitcher on the A-State baseball team in 2019, also earned his bachelor’s degree in general studies.  The remaining three Red Wolves who graduated tonight, but have seen their playing eligibility expire, all earned their master’s degree.  The group includes Erin Nunan, Casey Vaughan and Bryan Hall.

Nunan was a former member of both the women’s track and field and cross country teams and earned her master’s degree in sport administration.  She also served as a former graduate assistant for the Red Wolves’ Marketing and Fan Engagement Department.

Vaughan, who now works in the A-State Athletics Department in a Ticket Account Executive and Fan Development role, earned his master’s degree in Sport Administration and completed his career as a member of the Red Wolves’ baseball team in 2019.

Hall a four-year letterman on the football team from 2007-10, also earned his master’s degree.  Following his career at A-State, the two-time All-Sun Belt Conference selection signed a free agent contract with the NFL’s Baltimore Ravens and was a member of team when it won the Super Bowl in the 2012 season.

Original article source: http://www.astateredwolves.com//ViewArticle.dbml?DB_OEM_ID=7200&ATCLID=211808254 | Article may or may not reflect the views of KLEK 102.5 FM or The Voice of Arkansas Minority Advocacy Council