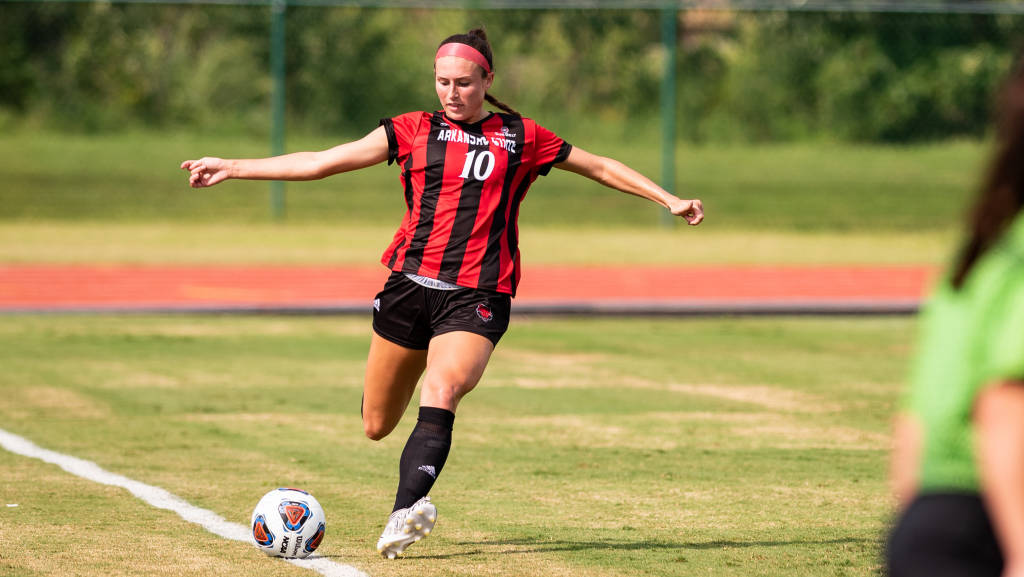 The Red Wolves (8-6-2, 5-4-0) trailed the Mountaineers by a goal entering the final minute of regulation when Maggie Ertl sent in a corner kick that found the foot of Victoria MacIntosh who turned and fired on goal. The shot attempt was blocked, but resulted in a scrum in front of the net and Ebenroth was able to get a touch on the ball and push it toward the net for the game-tying goal.

A-State carried the momentum in the first overtime period and the aggressive play paid off in the 99th minute when Ertl collected and took a shot inside the box that blocked to the feet of Sodoma, who quickly gathered the ball and took a shot to the far side of the net that hit the post and ricocheted back into the net for the game winning goal.

“We never gave up and we never quit because you never know when your chance might come,” A-State head coach Brian Dooley said. “Riley was in the right place at the right time and she put a great finish on the ball. Then in the overtime period we rested Sarah at the beginning and then brought her in about midway through and that seemed to give her an extra boost of energy and she put a great touch on the ball to win it for us.”

Appalachian State (8-8-1, 5-4-0) took 1-0 lead in the match following a goal off a deflected shot in the 61st minute. The original shot was taken by Kristin Brown, but on its way toward the goal it deflected off the shoulder of Kat Greer and into the net for the score.

It was the only shot that Kelsey Ponder allowed in on the day as she made three saves in her final start at home.

The Red Wolves nearly tied the match on multiple occasions before Ebenroth’s last second heroics. Bailey Gellis hit the crossbar with a shot across the front of the goal in the 62nd minute, while Sodoma was denied a goal in the 75th minute when Taylor Ray stopped her shot on a breakaway by the A-State sophomore to preserve the lead at that time.

A-State was efficient with it shots on the afternoon, putting 10 of its 14 shots on goal, while also winning five corner kicks to the Mountaineers three. Sodoma took five shots, all on goal, to lead the way, while both of Ebenroth’s also landed on goal.

With the win, A-State now moves into a tie for fifth place in the conference standing with the Mountaineers, but would hold the tiebreaker due to its win on Sunday. Arkansas State can finish as high as third in the league, with a victory over Coastal Carolina and a South Alabama loss on Thursday.

Kickoff against the Chanticleers is set for 1 p.m. at the CCU Soccer Stadium.

Original article source: http://www.astateredwolves.com//ViewArticle.dbml?DB_OEM_ID=7200&ATCLID=211776906 | Article may or may not reflect the views of KLEK 102.5 FM or The Voice of Arkansas Minority Advocacy Council