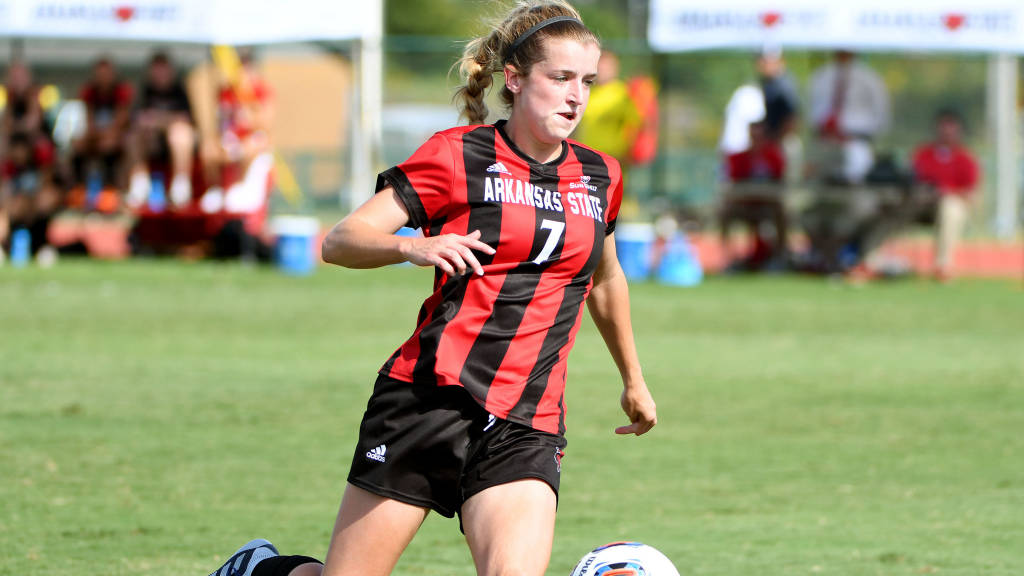 Martin, Tenn. (8/22/19) –Despite out shooting UT Martin 20-14, the Arkansas State Soccer team suffered its first setback of the regular season 3-1, at Skyhawk Field in Martin, Tenn.

Following the loss, the Red Wolves fell to 0-1 on the year while UT Martin improved to 1-0.

Manchester, Mo., native Sarah Sodoma connected her first goal of the regular season, in the 8thminute, when she controlled a pass from senior midfielder Lindsey Brochu, giving the Red Wolves a 1-0 lead over UT Martin. However, the Skyhawks evened the score (1-1) in the 12’ minute with an unassisted goal by Jill Hildreth.

The Skyhawks built a 3-1 advantage over the Red Wolves in the second half, when Hildreth took an assist from Nicole Collins to connect for her second goal of the night while Hendrikje Baurmann followed with the insurance goal in the in the 81stminute.

Megan McClure made one save for A-State in goal as the Red Wolves outshot the Skyhawks 20-14 on the night. The Scarlet and Black took 14 shots on goal compared to UT Martins five. Sodoma led A-State offensively with seven shots on goal while Sophia Restrepo and Haley Husted added two each.

Arkansas State will return to action in its home opener Sunday, Aug. 25 against Missouri State. Kickoff is set for at the A-State Soccer Park.

Original article source: http://www.astateredwolves.com//ViewArticle.dbml?DB_OEM_ID=7200&ATCLID=211809888 | Article may or may not reflect the views of KLEK 102.5 FM or The Voice of Arkansas Minority Advocacy Council