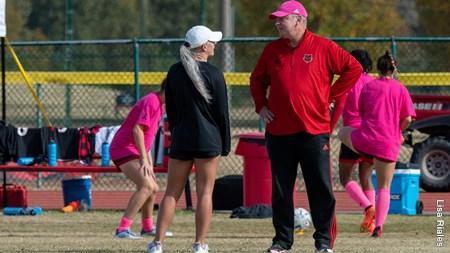 Jordan Church | D | Cincinnati, Ohio | Indian Hill HS | Kings Hammer SC
A starter in every game of her high school career, Church joins the Red Wolves from Indian Hill High School in Cincinnati, Ohio. A team captain her senior season, Church was an All-League and Southwest Ohio Team selection and was also a member of the All-Academic League and Southwest Ohio Teams. On the club level, Church played for Kings Hammer Soccer Club for over 10 years. She currently plays for Kings Hammer ECNL Red and has helped club teams to a state title, Midwest Regional Championship and a National Finalist appearance.

“Jordan competes at the highest club level in the country,” Dooley said. “She is prepared for the collegiate game the minute she steps on our campus this summer. She is strong on the tackle and can also get forward into the attack. She will make our program better!”

“Riley is a tall, attacking defender with the ability to play multiple positions,” Dooley said. “She has excellent passing skills and 1v1 defending ability. We are excited to add her to our squad next season.”

“Katie is a technical defender who will help our ability to possess and build from the back,” Dooley said. “She can play multiple positions with confidence and we look forward to her presence in our program.”

“Ally is a goalkeeper with great distribution skills and catching ability,” Dooley said. “She plays with confidence and control and can make the big save to start the attack. Our goalkeeper position is a strength of our team, and she will compete from the first day.”

Read the original here:
A-State Soccer Signs Four Players in November Signing Period. Article may or may not reflect the views of KLEK 102.5 FM or The Voice of Arkansas Minority Advocacy Council