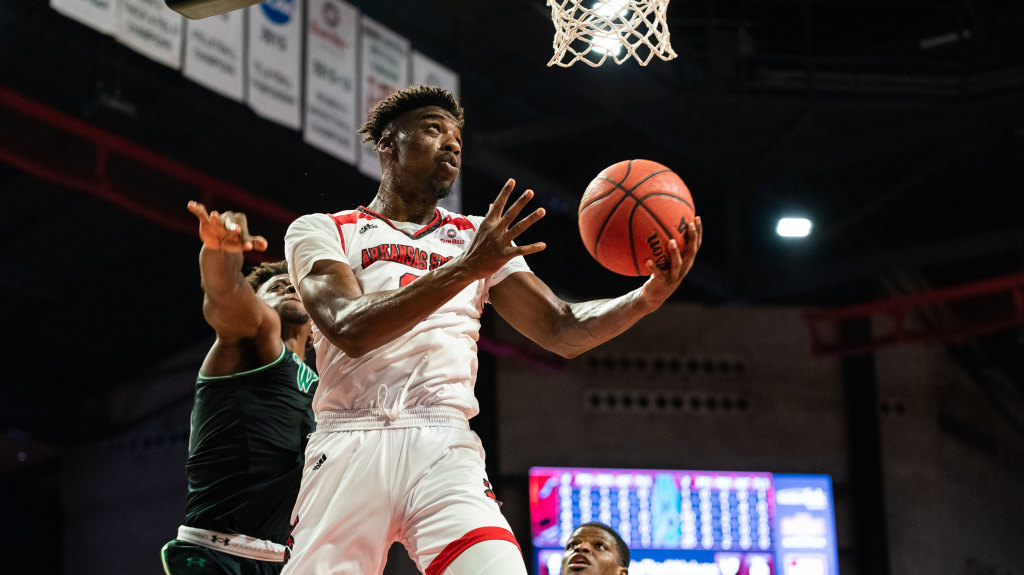 Malik Brevard recorded a double-double with a career-high 17 points and 10 rebounds to lead the Red Wolves (2-1) to the win, while Canberk Kus chipped in a career-high 18 points to lead all scorers. A-State held the Keydets (0-4) to under 40 percent shooting, including just 8-of-24 from the field in the second half, while shooting the ball exceptionally well at a 58 percent clip (29-of-50). The Red Wolves also shared the ball at a high level, dishing out 21 assists on those 29 buckets.

“That was a good offensive output,” head coach Mike Balado said. “Before the game, I told our guys that I wanted to shoot less than nine threes and score in the paint and I thought that’s where our strength was tonight. I thought we executed our game plan offensively excellently, and I was happy with the way we passed the ball. When you assist 21 times on 29 made baskets, that’s exceptional. That’s hard to do every game, but it’s our goal.”

The Red Wolves now have assists on 76 percent of their field goals in the 2019-20 campaign (53 assists on 71 field goals). A-State tallied six dunks against VMI after recording none in its first two outings, including a career-high four from Kus.

Myles Lewis led VMI with 11 points on 2-of-4 from the floor, including 7-of-10 from the free throw line. Kamdyn Curfman and Travis Evee each recorded 10 points to round out the Keydets’ double-figure scorers.

Brevard opened up by scoring A-State’s first nine points in the early going, as both sides went on brief 5-0 runs to trade leads. After VMI knotted up things at 15-all on a trey by Evee, the Red Wolves went on an 11-0 run to take a 26-16 lead while holding the Keydets scoreless for nearly five minutes.

Even more impressively, the Red Wolves went on a stretch of nearly 10 minutes where they made 12 shots in a row.

Through the first 20 minutes, A-State shot a blistering 69.2 percent from the field with Brevard leading the way with 15 of his 17 points to lead the Red Wolves to a 40-29 halftime lead. In the win, Brevard buried eight of his nine shots from the field.

VMI opened up the second half with four free throws by Lewis to cut the deficit to nine, Brevard slammed home another score to make it an 11-point game early in the half. However, the Keydets continued to trim the lead, going on a 4-0 run into the under-16 media timeout to cut A-State’s lead to 44-37. Seven of VMI’s first nine points in the half came at the charity stripe, including the first six.

After Lewis nailed his seventh free throw of the half for the Keydets, Kus heated up with three straight scores – two of them dunks – to spark a 9-0 run that stretched A-State’s lead to 15 after Jerry Johnson Jr. drilled a trey. During that scoring run, the Red Wolves held VMI scoreless for over four minutes.

With 7:34 left in the game, Evee drained his second three of the night to cut A-State’s lead down to single-digits at 56-48. Christian Willis then moved that lead back out to double-digits and halted what was nearly three-minute-long scoreless streak for the Red Wolves when he drilled a fade away bucket followed by the and-one to make it 63-51.

A-State managed to control its double-figure advantage through the rest of the contest, stretching out to as much as 16 with a 6-0 run with just over a minute to play. After the Keydets scored three in a row to cut it to 69-56, a Caleb Fields layup closed out the scoring for the night with 17 seconds to go. The freshman Fields ended the night with eight points, a career-best to start his young career.

The Red Wolves Classic continues Friday with a pair of contests, first at 12:30 p.m. between VMI and Idaho before A-State hits the court at approximately 7:30 p.m. against UC Davis. The teams will take a break in action on Saturday before concluding the event Sunday at 11 a.m. (VMI vs. UC Davis) and 1:30 p.m. (A-State vs. Idaho).

Original article source: http://www.astateredwolves.com//ViewArticle.dbml?DB_OEM_ID=7200&ATCLID=211816081 | Article may or may not reflect the views of KLEK 102.5 FM or The Voice of Arkansas Minority Advocacy Council