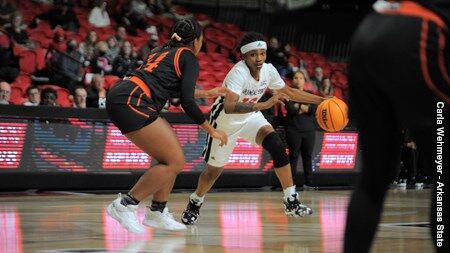 JONESBORO, Ark. (11/16/22) – Dominance in the post set the tone early for the Arkansas State women’s basketball team, which scored 60 points in the paint in a 95-50 victory over Hendrix in the team’s home opener Wednesday night at First National Bank Arena.

Two players registered double-doubles for A-State (1-2), with Anna Griffin scoring 10 points with 13 rebounds, while Keya Patton scored 10 points and grabbed a career-high 10 boards her much-anticipated return to the floor after a season-ending injury last season. In 18 minutes, the guard stuffed the stat sheet, handing out six assists to go along with five steals and a blocked shot.

Madi Pierce led the Warriors with 11 points and seven rebounds. A-State forced Hendrix into 23 turnovers, including 19 thefts, while winning the rebounding battle 61-35.

A-State started fast, scoring the game’s first six points and leading by double figures at the 5:28 mark in the first quarter after a Kapinga score. Hendrix dwindled the deficit down to eight, but that would be the closest it would get the rest of the night, with the Red Wolves owning a 28-16 lead after the first 10 minutes.

After a Pierce free throw cut it to 11, Arkansas State surged ahead with a 15-0 run to open up a 45-19 lead with 4:23 to go in the half. Higginbottom knocked down a trey with 2:11 remaining, then Kiayra Ellis scored four of her career-high eight points in the final minute of the first half to give the hosts a 52-26 lead at the break.

The Red Wolves kept pouring on the points in the third quarter, going on a 19-3 stretch to push their lead out to 40. A-State shot an even 50 percent in the period and led 80-40 entering the final 10 minutes.

A-State continued to stand strong defensively in the fourth quarter, holding Hendrix to just 3-of-13 from the floor, while Linay Bodden recorded her first career points in just under nine minutes of action. The lone true freshman on the squad scored eight points and grabbed six rebounds in her A-State debut.

Arkansas State continues its four-game home stand Saturday, hosting Utah State. Tip-off against the Aggies inside First National Bank Arena is slated for 2 p.m. on ESPN+. The game can also be heard on the radio via the EAB Red Wolves Sports Network station 95.3 and 96.9 The Ticket Radio Network.

Read the original here:
A-State Routs Hendrix in Home Opener, 95-50. Article may or may not reflect the views of KLEK 102.5 FM or The Voice of Arkansas Minority Advocacy Council