A-State Rallies From Down 16 to Top Tulsa
0 Comments 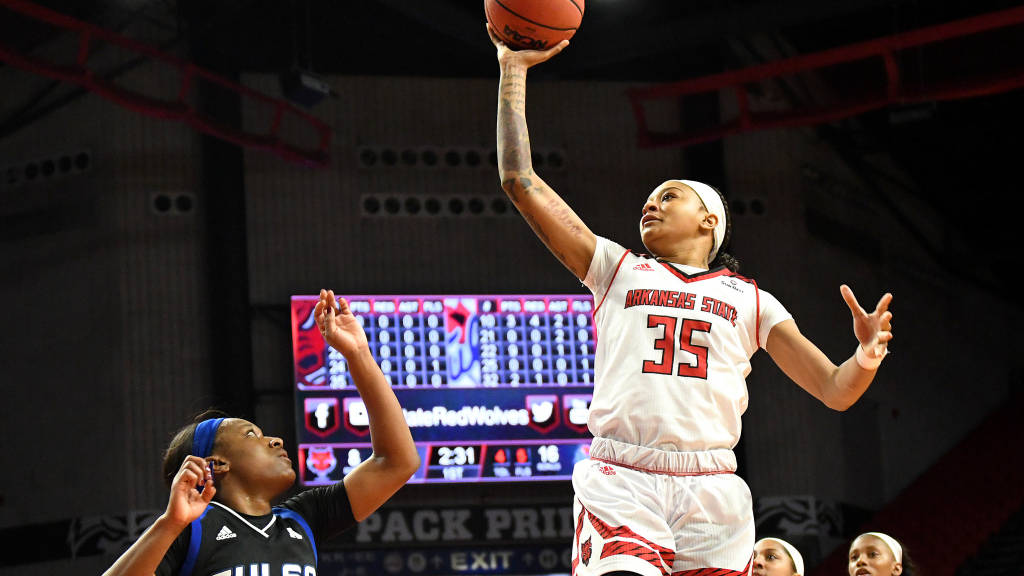 The Red Wolves evened their record at 4-4 by claiming their second home win of the season over an American Athletic Conference team.  A-State also collected a 77-66 win over Memphis on Nov. 12 and now holds a 3-1 record this year at First National Bank Arena.  Tulsa also saw its record move to .500 at 5-5.

Arkansas State, which outscored Tulsa 30-13 in the fourth quarter while posting a .643 field goal percentage, was led by three players scoring in double figures.  Senior guard Akasha Westbrook was responsible for a team-high 15 points, while sophomores Peyton Martin and Morgan Wallace added 14 and 10, respectively.

“It was a pretty bad start for us in that first quarter, but we just tried to be patient and work our way through it,” A-State head coach Brian Boyer said. “They did a really good job of making points in transition and really the message was we just weren’t scrambling hard enough but we did a good job after that. Defensively we were much better in the second, third and fourth quarters and this was one of the most physical games I’ve seen in some time and I was proud of the way our players handled that.”

The Red Wolves made 9-of-14 shots in the fourth quarter to increase their field goal percentage for the game to .383.  The Golden Hurricane, conversely, jumped out to a 7-0 lead to start the game thanks in part to a 52.9 shooting percentage in the first quarter that dropped to .353 by the end of the contest.

Tulsa held a 26-14 lead at the end of the opening period and increased its advantage to as much as 16 points with 5:13 left in the second.  Trailing 36-21 with just over three minutes remaining in the half, A-State went on an 8-0 run to pull within 36-29 at the break.

The Golden Hurricane led 47-40 at the third period’s 1:05 mark, and that’s when A-State began its surge that would see it actually take a 16-point lead of its own in the fourth quarter.  The Red Wolves went on a 7-0 run to tie the game for the first of three times, the last at 53-53 with 7:31 left in the game.

A-State broke the tie on a pair of Westbrook free throws to take its first lead and start a 20-4 run that made the score 73-57 with under a minute remaining.  The Red Wolves not only shot 64 percent in the fourth, they also made 12-of-15 free throws to help them complete the comeback.

“I’m really proud of this team because finals week is a tough time with balancing schedules and academics and we haven’t lost our focus in the classroom or on the court,” Boyer said. “Our practices have been hard and we’ve practiced well and as I told the team in the locker room that if we keep competing and practicing hard we will be fine.”

While Tulsa outrebounded A-State 48-43, the Red Wolves posted 18 second-chance points to the Golden Hurricane’s 11.  The home team also outscored the visitors 38-24 in the paint and got four more points from its bench.

In addition to her 14 points, Martin also pulled down a team-high nine rebounds to narrowly miss her second double-double of the season.  Westbrook collected six rebounds while also recording four steals, which tied her most of the year.  Tulsa was led by two players scoring in double figures, including Morgan Brady with a game-high 18 points.  Alexis Gaulden added 17 for the Golden Hurricane.

Arkansas State remains at home for its next game, hosting Mississippi Valley State on Thursday, Dec. 13, at 11:30 a.m.

Original article source: http://www.astateredwolves.com//ViewArticle.dbml?DB_OEM_ID=7200&ATCLID=211783310 | Article may or may not reflect the views of KLEK 102.5 FM or The Voice of Arkansas Minority Advocacy Council