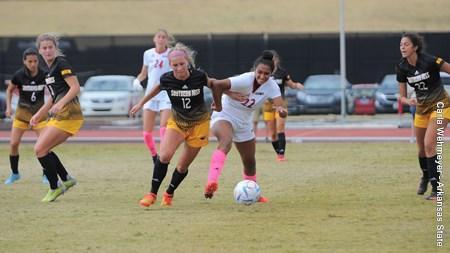 JONESBORO, Ark. (10/23/22) – Aliyah Williamson netted a goal in the 81st minute, capping a second-half rally by the Arkansas State soccer team, which played Southern Miss to a 2-2 draw Sunday at the A-State Soccer Park.

The Red Wolves (8-5-3, 6-2-1 SBC) overcame a 1-0 deficit at the half, scoring a pair of match-tying goals to force the draw in the penultimate contest of the regular season.

USM (1-9-4, 1-5-3) struck first in the 22nd minute on a goal by Esmeralda Figueroa. A-State had a pair of shots saved by Golden Eagle keeper Alex Helbing. In the 45th minute, Sydoney Clarke booted a shot into the back of the net, but was called offside to nullify the score and keep it 1-0 at the break.

A-State tied it in the 54th minute when Williamson found Emma Riley, who drilled a shot into the right side of the goal to make it 1-1.

The Golden Eagles reclaimed a 2-1 lead in the 62nd minute when Nolubabalo Sishuba put her team ahead with a score. That score would hold until Williamson found the net for her fourth goal of the year – the equalizer in the 81st minute.

Arkansas State closes out the regular season at home Thursday, facing South Alabama, who sits atop the Sun Belt West Division table just two points ahead of the Red Wolves. Kickoff is set for 3 p.m. on ESPN+.

Read more here:
A-State Plays USM to 2-2 Draw. Article may or may not reflect the views of KLEK 102.5 FM or The Voice of Arkansas Minority Advocacy Council