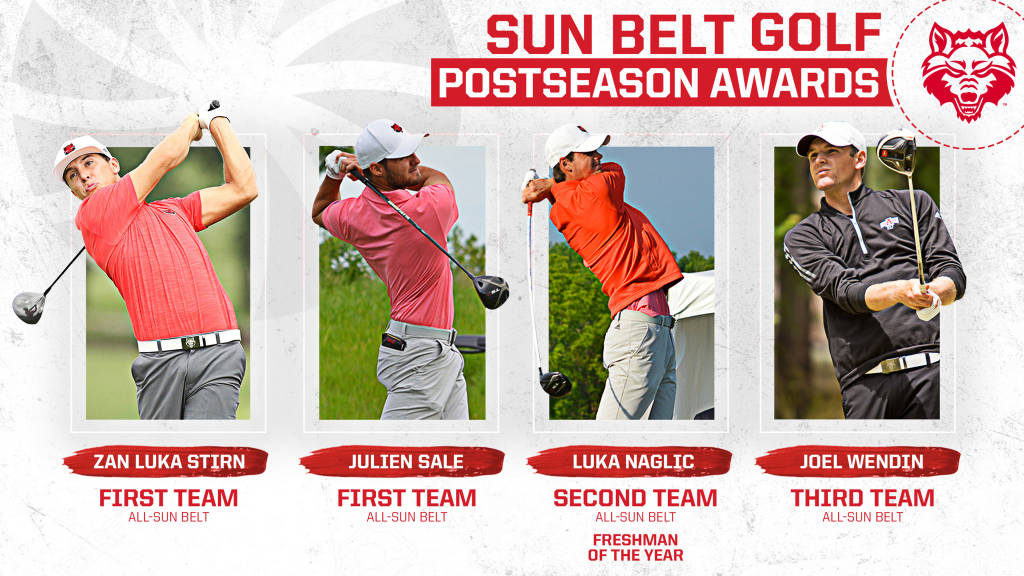 Inducted into the Golf Coaches Association of America (GCAA) Hall of Fame this past December, A-State head coach Mike Hagen directed the Red Wolves to their first ever Sun Belt title this season and to their first appearance in the NCAA Championships since 2002.

Led by First Team All-Sun Belt selections Zan Luka Stirn and Julien Sale, second-team choice Naglic and third-team pick Joel Wendin, Arkansas State ranked as high as 17th in the nation this season.  The Red Wolves are currently listed as the No. 35team in the country by Golfstat, which is the best in the Sun Belt and would be the highest the program has ever been ranked at the end of a season.

A-State’s four all-conference picks were not only its most ever, they were the most in the league and give the Red Wolves a Sun Belt-high 13 selections on the postseason team over the last four seasons combined.

Stirn, named the Sun Belt Conference Men’s Golfer of the Week three times this season, is making his third appearance on the all-conference team after earning third-team honors a year ago and first-team designation as a freshman.  The junior standout is the 129th-ranked player in the nation and completed the season with a 71.06 scoring average that is the highest in school history since at least the 1993-94 season.

Giving A-State two First Team All-Sun Belt picks for the first time, Sale completed his initial season at A-State with a 71.69 scoring average for the second lowest mark by an A-State player since at least 1994 behind only Stirn.  The junior newcomer is ranked 130th in the nation after most recently becoming the first player in school history to collect a top-25 finish at an NCAA Regional.

Naglic becomes the third A-State player to be named the Sun Belt Conference Freshman of the Year, joining Stirn in 2017 and Lloyd du Preez in 2008.  He was tabbed second-team all-conference after posting seven top-25 finishes, including a runner-up effort at the Sun Belt Tournament.  He is currently ranked as the No. 231 player in the nation by Golfstat and completed the season with a 72.29 scoring average.

As a team, Arkansas State finished the year with five tournament championships, which were the second most in school history for a single season.  It concluded the 2019 campaign with the program’s best all-time scoring average (285.91) since at least 1993, and records indicate probably in A-State history.

Men’s Golfer of the Year

Men’s Golf Freshman of the Year

Men’s Golf Newcomer of the Year

Original article source: http://www.astateredwolves.com//ViewArticle.dbml?DB_OEM_ID=7200&ATCLID=211804161 | Article may or may not reflect the views of KLEK 102.5 FM or The Voice of Arkansas Minority Advocacy Council