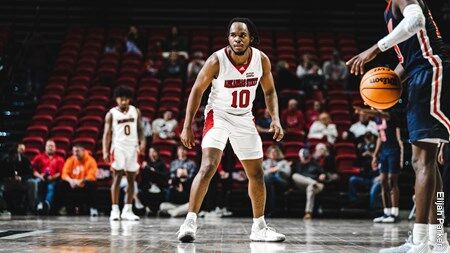 All five of Farrington’s field goals came from beyond the arc, where he went 5-of-8. Markise Davis scored 15 points for the third game in a row on 6-of-7 shooting, including 3-of-4 from deep, to go along with five boards. Julian Lual added 12 points off the bench and went a team-best 6-for-6 at the charity stripe.

A-State surged out to an early 10-point lead before the Wildcats rallied with an 11-0 run to take their one lead of the contest, up 17-15 with 10:11 to play in the first half. Back-to-back treys by Farrington halted the run, as the Scarlet and Black pushed its lead out to as much as 17 on a layup by Lual with under two minutes left in the half. A-State owned a commanding 44-27 lead at halftime.

The Red Wolves scored seven unanswered to open the second half to extend their lead to 51-27. Bethel then went on a brief 5-0 run to pull within 18, but that would be the slimmest margin the rest of the way. A-State led by as much as 31 when back-to-back Davis treys put the score at 86-55.

Arkansas State concludes its home stand Thursday, Dec. 1, hosting Mississippi Valley State. Tip-off against the Delta Devils is set for 7 p.m. on ESPN+. The contest can also be heard on the EAB Red Wolves Sports Network, including flagship station 107.9 KFIN in the Northeast Arkansas area.

More here:
A-State Men’s Hoops Routs Bethel 90-65. Article may or may not reflect the views of KLEK 102.5 FM or The Voice of Arkansas Minority Advocacy Council