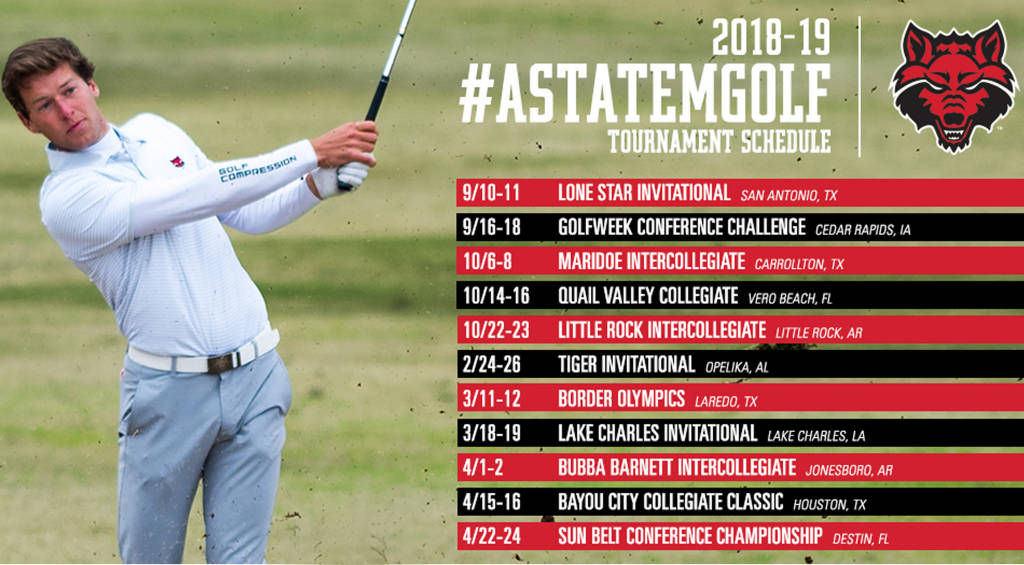 JONESBORO, Ark. (8/10/18) – The Arkansas State men’s golf team is set to begin its 2018-19 season Sept. 10-11 in San Antonio, Texas, at the Lone Star Invitational, which is one of 10 regular-season tournament’s on the Red Wolves’ schedule that will also feature its annual home tournament, the Bubba Barnett Intercollegiate, at RidgePointe Country Club.

A-State is set to begin its fourth season under head coach Mike Hagen, who has led the program to 10 tournament championships, 19 top-three finishes and a 330-102-10 combined head-to-head record for a .758 winning percentage. The Red Wolves ended last season ranked No. 72 in the nation after collecting at least a runner-up finish in six of 11 tournaments.

A-State will resume play in the spring Feb. 24-26 at the Tiger Invitational in Opelika, Ala. The Red Wolves have two outings during back-to-back weeks the following month, starting with the Border Olympics March 11-12 that will be followed by the Lake Charles Invitational March 18-19.

“We added the Golfweek Conference Challenge, Maridoe Intercollegiate, Quail Valley Collegiate, Tiger Invitational and Lake Charles Invitational to our schedule this year,” said Hagen. “All five of these events will pose a great challenge to our team. It’s by far the strongest schedule we’ve had over my four years with the program. It’s my goal every year to provide our team opportunities to compete against some of the best programs in the country, and I’m excited to see how our team steps up to the challenge.”

Arkansas State will host the 23rd annual Bubba Barnett Intercollegiate April 1-2. The Red Wolves have won their home event each of the last two years, marking the first time in 16 years they claimed the tournament’s title in consecutive seasons.

The team will play its final regular-season tournament April 15-16, when it travels to Houston to compete in the Bayou City Collegiate Classic.

Original article source: http://www.astateredwolves.com//ViewArticle.dbml?DB_OEM_ID=7200&ATCLID=211767848 | Article may or may not reflect the views of KLEK 102.5 FM or The Voice of Arkansas Minority Advocacy Council