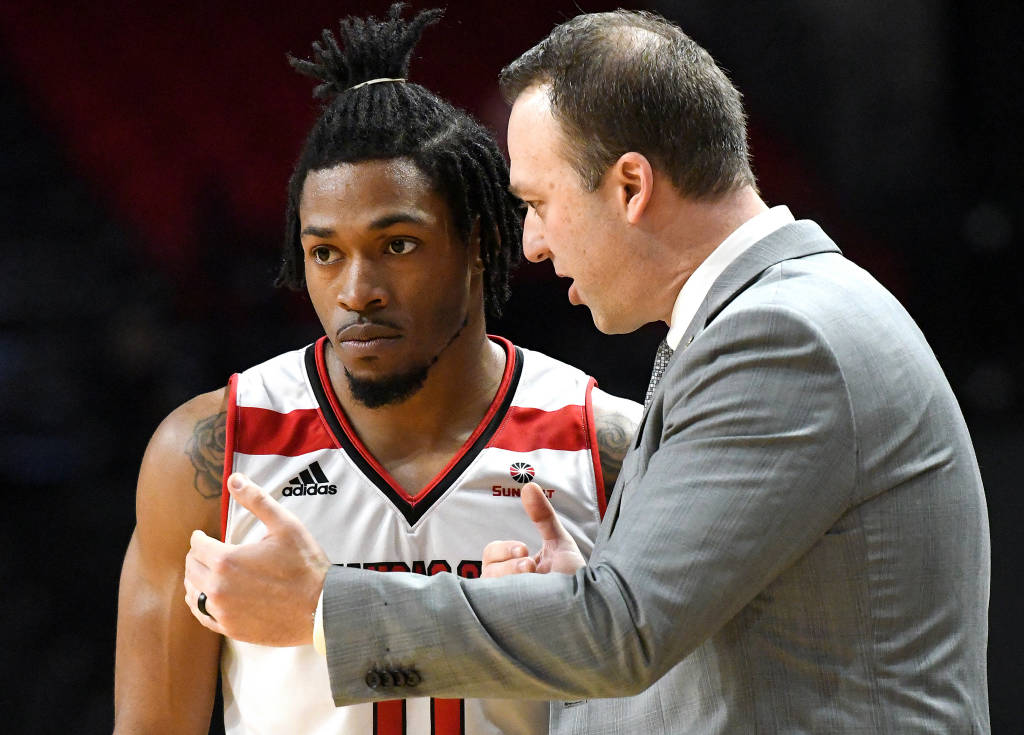 Playing their first double overtime game since the 2014 season and their first at home since 1992, the Red Wolves improved their record to 4-6 and now stand 3-0 at home.  Florida Atlantic saw its record move to 7-3 on the year.

Cockfield scored 11 of his 34 points during overtime, including a pair of clutch free throws with one second left on the clock to send the game into a second extra period.  He was joined in double figures by sophomore guard Marquis Eaton with 15 points.

Both teams shot 28 percent from the floor in a contest that featured 17 lead changes and 12 ties.  FAU built its largest lead of five points nearly midway through the first half, but the Red Wolves took a 38-35 advantage into the break.

“What a hard fought game,” said A-State head coach Mike Balado.  “I can’t put into words how proud I am of these guys.  It was great to win a game like that where it went into double overtime and both teams played so hard.  I have to give FAU a lot of credit – Dusty May is doing an excellent job with that team, and I knew it was going to be hard game going in.  We shot 28 percent from the field, but I just keep telling these guys that if you guard the way we did, then you are going to win games if shots aren’t falling.”

With the score tied 46-46 with 15:04 left in the second half, Arkansas State put together an 8-0 scoring run over the next nine minutes to take its largest lead of the night at 54-46.  However, A-State didn’t hit another field goal the rest of regulation and was outscored by FAU 12-4.

A-State senior guard Grantham Gillard hit a pair of free throws with 28 seconds left in the second half, but the Owls were able to even the score at 58-58 on a layup 14 second later.  Cockfield was able to get off the last shot of the half, but was unable to connect.

FAU scored the first five points of the initial overtime to put the Owls up 63-58, but A-State made the last five that included an Eaton free throw, layup by sophomore forward J.J. Matthews and Cockfield’s game-saving shots at the charity stripe.

The second overtime saw the Owls work their way to a 68-66 lead with 1:39 left, but Cockfield again tied the game with two free throws.  Following an FAU turnover, he came back to score on a jump shot that would give the Red Wolves the lead for good.

His free throws were part of a 7-0 run for Arkansas State that gave it a 73-68 advantage with just 14 seconds remaining.  FAU hit a big 3-point field goal with 12 seconds to go, but couldn’t get any closer as Cockfield sealed the win by once again making a pair of free throws that set the final score.

Florida Atlantic held a slight advantage on the boards at 61-59, but was outscored 32-26 in the paint by A-State.  The Red Wolves also committed five fewer turnovers and their bench also provided 26 points to the Owls’ 20.

Cockfield’s 34 points were the second most of his career. Malik Brevard hauled in a game-high 12 rebounds.  Cockfield scored 14 points at the line, where A-State was 24-of-33 as a team.  FAU, which was led by three players scoring in double digits, hit 15-of-17 free throws.  Anthony Adger scored a game-high 21 points for the Owls.

Original article source: http://www.astateredwolves.com//ViewArticle.dbml?DB_OEM_ID=7200&ATCLID=211783829 | Article may or may not reflect the views of KLEK 102.5 FM or The Voice of Arkansas Minority Advocacy Council