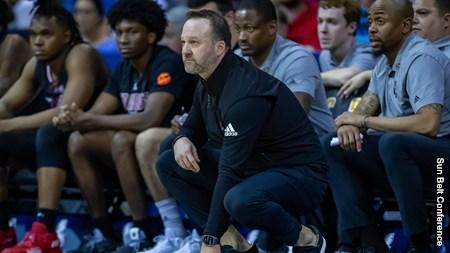 “We are extremely excited to add Caleb Byrd to our basketball family,” Balado said. “We have watched him for a while now and he fits our culture like a glove. His natural ability to score the basketball, as well as the ability to make plays for others, is a special gift. He is tenacious defensive player and adding him to our roster of guards will make us a better team.”

Byrd arrived at Eastern Florida State College after appearing in 14 games at Atlantic Sun Conference Champion Jacksonville State in 2021-22. He totaled 62 minutes in those 14 appearances, including the NCAA Tournament matchup against Auburn, and scored 8 points against LaGrange. Byrd began his collegiate career at Charlotte, playing in nine games during the COVID-19 pandemic season of 2020-21.

An Atlanta, Ga., native, Byrd scored 2,142 points in his Newton High School career. Ranked a three-star recruit out of high school by 247Sports and Rivals, he averaged 22 points per game as a senior on the way to earning second-team 7A All-State honors. He averaged 26.5 points per game during region and state tournament play while being named first-team All-Region. Before transferring to Newton, he played for Rome High School in Georgia. As a junior, he led the state in scoring, averaging 35 points per game. In December of 2018, he scored 51 points against Forest Park High School. In 2019, he was named first-team 5A All-State and was Region Player of the Year. As a sophomore, he earned first-team All-Region and second-team All-State honors.

More here:
A-State Men’s Basketball Signs Caleb Byrd. Article may or may not reflect the views of KLEK 102.5 FM or The Voice of Arkansas Minority Advocacy Council