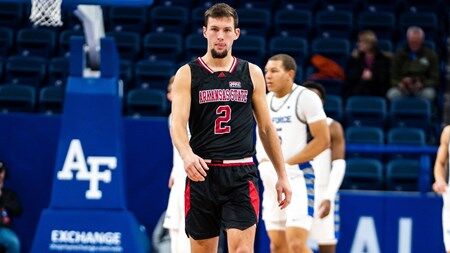 USAFA, Colo. (12/9/22) – The Arkansas State men’s basketball team faced a 17-point halftime deficit and was unable to recover in an 80-55 loss against Air Force Friday at Clune Arena.

Air Force (7-4) drained 11 3-pointers in the contest and shot 56 percent from the field. A-State (5-5) finished 40 percent from the field, but tied a season-high with 16 turnovers in the game. Avery Felts led A-State with 14 points, shooting 4-of-5 from 3-point range. Terrance Ford Jr. added 13 points off the bench. Jake Heidbreder led three Air Force players in double figures with 16 points.

Back-to-back 3-pointers from Felts and Malcolm Farrrington saw A-State cut the deficit to 14, 59-45, with 9:45 to play, but the Red Wolves were unable to get closer the remainder of the game. Air Force went on to outscore A-State 36-28 in the half to set the final margin.

A-State returns to First National Bank Arena for a three-game home stand to close out the non-conference schedule. The Red Wolves host Southeast Missouri Wednesday with tip-off at 7:00 p.m. on ESPN+ and can be heard on the EAB Red Wolves Sports Network and flagship station 107.9 KFIN in the Northeast Arkansas area. For the latest on A-State men’s basketball, follow the team on Twitter (@AStateMB), Facebook (/AStateMB) and Instagram (@astatemb).

Continued here:
A-State Men’s Basketball Falls at Air Force. Article may or may not reflect the views of KLEK 102.5 FM or The Voice of Arkansas Minority Advocacy Council