A-State Knocks Down 14 Blocks, but Drops Four-Set Match to Troy 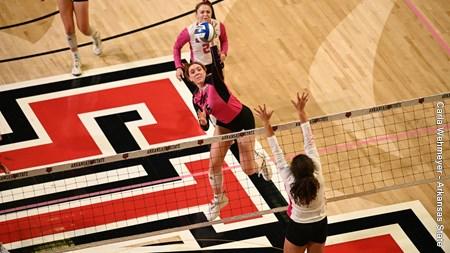 The Red Wolves held Troy to .143, partly due to those 14 blocks – seven by freshman Abby Harris and five from fellow frosh Yazmyn Billings, who also knocked down eight kills. Also on the defensive side, Sarah Martinez collected a match-high 21 digs, while also serving three of A-State’s four aces.

SET 1 – TROY 25, A-STATE 20
A-State started off strong, leading 5-2 after two kills and a block by Putt. The Red Wolves later pushed their lead out to 14-9, with Troy calling a timeout after an attack error just before the media timeout. A-State’s lead expanded to 16-10 on a block by Billings and Elise Wilcox. After a Martinez ace made it 18-14, Troy took the lead with a 5-0 run. A-State tied it at 20-all on a Helzer kill, but Troy took the set with a 5-0 run to lead 1-0 in the match.

SET 2 – TROY 25, A-STATE 23
Arkansas State again seized early momentum, leading by as much as four early in the set. The Trojans closed the gap with a 9-3 run capped by an ace by Tori Hester that made it 19-17 in favor of the visitors, but A-State reclaimed a 21-19 lead with four straight points to force a Troy timeout. Another kill by Helzer made it 22-20, but the Trojans once again closed out the set to lead 2-0 in the match, securing five of the last six points.

SET 3 – A-STATE 28, TROY 26
The Trojans looked to close out the match in three, taking an early 5-1 lead, but A-State clawed back to tie it on multiple occasions. Helzer gave the Red Wolves their first lead of the set with a kill to make it 20-19 before a solo block by Harris once again untied the score. Troy called a timeut after an attack error made it 22-20 before Wilcox and Billings again teamed up for a block to make it 23-20. A service error gave A-State four tries at set point, but Troy took five of the next six to hold match point up 25-24, then again up 26-25. However, the Scarlet and Black did not go away, taking the final three points to extend the match.

SET 4 – TROY 25, A-STATE 23
A-State kept up the momentum in the fourth set, leading by as much as four after a Helzer kill made it 10-6 and forced Troy to call an early timeout. After the Trojans tied it at 11-all, the Red Wolves once again pushed their lead out to as much as six, leading 21-15 after a Troy miscue. A service error later put A-State’s lead at 23-19, but Troy went on a 6-0 run to take the set and win the match.

The Red Wolves face the Trojans again Saturday to close out the weekend series, with first serve inside First National Bank Arena slated for 1 p.m. on ESPN+.

Read more:
A-State Knocks Down 14 Blocks, but Drops Four-Set Match to Troy. Article may or may not reflect the views of KLEK 102.5 FM or The Voice of Arkansas Minority Advocacy Council