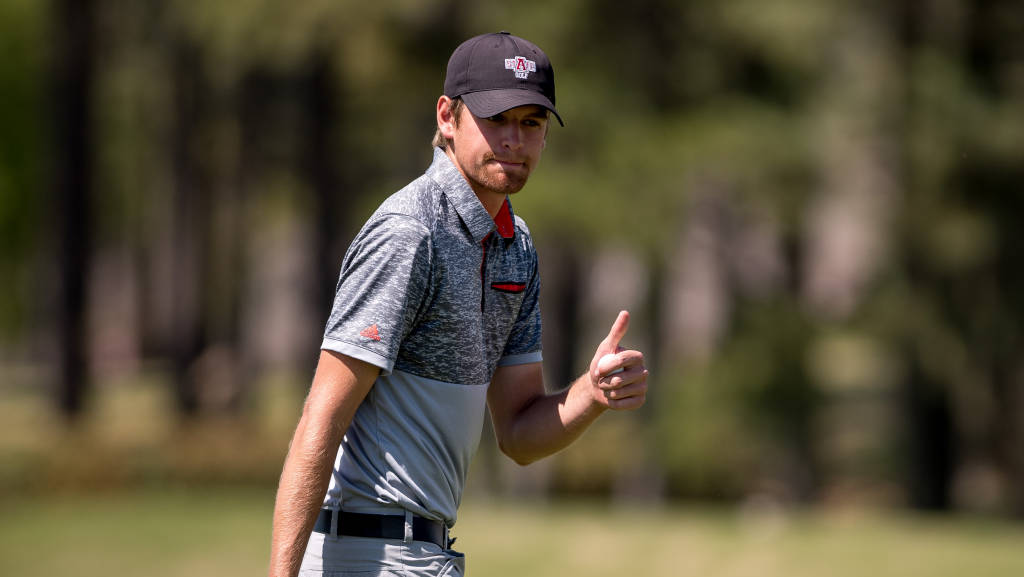 The Red Wolves began play yesterday with a 279, which was its third lowest single-round score of the season and positioned them atop the 16-team field. A-State now holds a 13-under 563 for both rounds combined, but North Florida and South Florida moved ahead of the Red Wolves in the standings with a 558 and 559, respectively.

Junior Zan Luka Stirn shot a season-best 69 for each of the first two rounds and is currently tied for seventh place to lead Arkansas State with a combined 138. Joined by senior Joel Wendin, and juniors Julien Sale and Matthew Cole, Stirn is one of four Red Wolves among the top-20 individual leaders.

Wendin climbed seven places in the standings to tied for ninth after carding a second-round 68, giving him a combined 139. His score Monday tied his lowest round of the season.

Sale carded a first-round 68 that had him tied for second place, but he tacked seven strokes onto that score for the second round to drop him into a tie for 19th place with a 143 total. Also tied for 19th, Cole recorded a 71 and 72 for the first and second rounds, respectively.

Also competing for the Red Wolves, freshman Luka Naglic is tied for 44th place with a combined 147 (71-76).

The Quail Valley Intercollegiate will wrap up tomorrow with the third and final round.

Original article source: http://www.astateredwolves.com//ViewArticle.dbml?DB_OEM_ID=7200&ATCLID=211776161 | Article may or may not reflect the views of KLEK 102.5 FM or The Voice of Arkansas Minority Advocacy Council