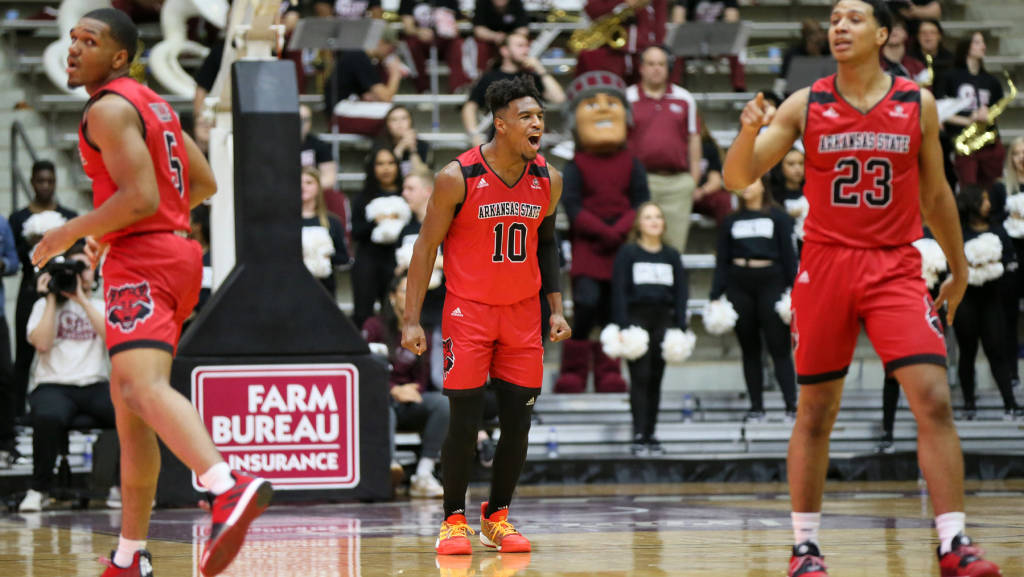 “Obviously any time you play a rivalry game, records are thrown out the window,” said A-State head coach Mike Balado. “Even though Little Rock didn’t play well for about 25 minutes of the game, I knew they would come back and that’s what they did. Our late game execution was bad and it has to get better. We squeaked out a win tonight. Building a 22 point lead, we did everything we want to do to play Arkansas State basketball, but that last five minutes was not. I’ll be honest with you, we got lucky tonight. I’m happy for the win, but not satisfied with the way we performed, but any road win in this league you’re happy with.”

A-State led 82-73 with 54 seconds to play, but the Trojans went on a 10-0 run to lead 83-82 with 12 seconds remaining. Gillard was fouled with 6.2 on the clock and knocked in two free throws to put A-State up by one. The Trojans raced the length of the floor and Jaizec Lottie got up a shot before the buzzer sounded, but the attempt was wide of the goal as the Red Wolves were able to hold on for the victory.

Arkansas State heads to South Alabama for a 7:00 p.m. matchup against the Jaguars on Thursday with the game available on ESPN+. For the latest on A-State men’s basketball, follow the Red Wolves on Twitter @AStateMB, at Facebook.com/AStateMB and on Instagram at ‘AStateMB’

Original article source: http://www.astateredwolves.com//ViewArticle.dbml?DB_OEM_ID=7200&ATCLID=211788970 | Article may or may not reflect the views of KLEK 102.5 FM or The Voice of Arkansas Minority Advocacy Council