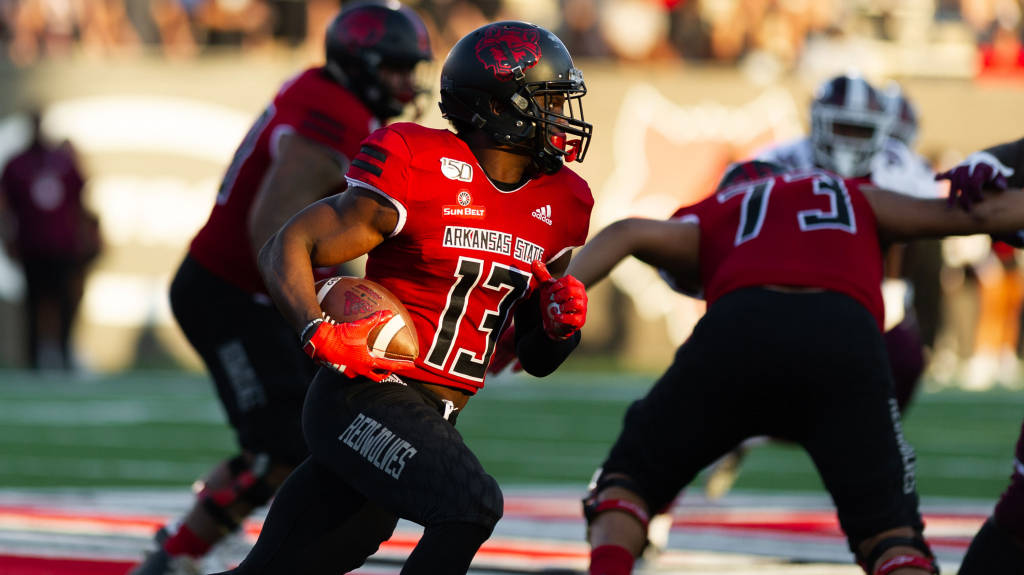 The Red Wolves (2-2) relied upon 17 unanswered points in the second quarter to take the lead for good, while the A-State defense came up with key stops in the red zone in the fourth quarter to hold off the high-powered Salukis (2-2).

“I’ll never gripe about a win, even when it’s not a pretty win, but we found a way to get it done,” head coach Blake Anderson said. “I’m really pleased with the offense. We ran the clock out there at the end, so that was a good way to finish. I thought the drive right before halftime was critical and it proved to be a key point for us to go down the field and get that (score). Southern Illinois did a good job of keeping us off-balance all night. It was a really frustrating night trying to find something that could get us into a rhythm defensively. Our defense got some stops when we needed them, and it was enough to get us a win so I’m glad we’re 2-2 going into conference play.”

Logan Bonner completed 17 of 31 passes for 320 yards, with 13 of those to either Bayless or Merritt. Merritt also hauled in two of Bonner’s four touchdown strikes. Despite being outgained in total offense (526-474), the Red Wolves capitalized through the air, eating up 357 yards passing. Bonner’s four touchdowns responsible for matches his career best set in the season opener against SMU.

Cody Grace posted a nice night punting the ball, averaging a career-high 50.0 yards per punt on four attempts with a long of 57. Defensively, Tajhea Chambers led the way with a career-high 11 total tackles and an interception – the first of his career. William Bradley-King was a force in the backfield all night, tallying 4.0 tackles for loss and a pair of sacks, including a forced fumble which he recovered.

A-State drew first blood when Ryan Graham punched it in from 14 yards on just the third play from scrimmage, set up by a 50-yard kickoff return by Jeff Foreman and a 37-yard pass from Bayless to Bonner. The Red Wolves led 7-0 with 13:33 on the clock.

The Salukis evened it up just over a minute later when Javon Williams, Jr., plunged across the goal from three yards out.

Midway through the first, Bonner uncorked a 43-yard strike to Merritt to put the Red Wolves back ahead 14-7 with 7:47 remaining.

SIU tied up the score once more with 2:26 left in the first when Kare Lyles connected with Avante Cox for a 26-yard touchdown strike to end a 9-play, 80-yard drive that lasted 5 minutes, 16 seconds. Cox led all receivers with 142 yards.

With 13:58 remaining in the first half, Blake Grupe’s 35-yard field goal attempt split the uprights to give A-State a 17-14 lead.

The Red Wolves stretched their lead to 24-14 when Merritt hauled in a 10-yard pass from Bonner to cap off a 5-play, 30-yard drive that was set up by a fumble recovery by William Bradley-King. Midway through the second quarter with 8:17 left, SIU kicker Griffin Cerra’s 26-yard field goal try hit the upright, preserving the 10-point lead.

A Tajhea Chambers interception in the end zone set up a late-quarter score by Jonathan Adams, who came down with a 25-yard toss from Bonner. The call, originally ruled an incomplete pass, was reversed upon official review, giving the Red Wolves a 31-14 halftime lead.

On SIU’s opening drive in the second half, Lyles led the Salukis on a nine-play, 75-yard drive capped off by a 39-yard strike to Sam Bonansinga to cut the Red Wolves’ lead to 31-21.

The Salukis threated once again, driving all the way down to the A-State 7-yard line, but the Scarlet and Black defense held strong, forcing a turnover on downs with under six minutes remaining in the third.

After a four-yard rush by Isaiah Azubuike, Bonner found Bayless for an 89-yard scoring play – Bonner’s fourth touchdown throw of the night and the longest passing play in Centennial Bank Stadium history, which extended A-State’s lead back out to 38-21. Azubuike led the Red Wolves on the ground with 88 yards on 15 carries, both career highs.

Grupe added a 43-yard field goal to open the fourth quarter to move A-State’s lead to 41-28. A-State’s defense then once again held strong against an SIU scoring threat, when Saluki Romeir Elliott dropped a pass to turn the ball over on downs.

The Red Wolves will next hit the road to open Sun Belt Conference play with a two-game road stint. A-State first travels to Troy to take on the Trojans at 5 p.m. on Sept. 28, followed by a 2:30 p.m. showdown in Atlanta at Georgia State on Oct. 5, before returning home to face Louisiana in a nationally-televised Thursday night matchup on ESPNU.

Original article source: http://www.astateredwolves.com//ViewArticle.dbml?DB_OEM_ID=7200&ATCLID=211812289 | Article may or may not reflect the views of KLEK 102.5 FM or The Voice of Arkansas Minority Advocacy Council