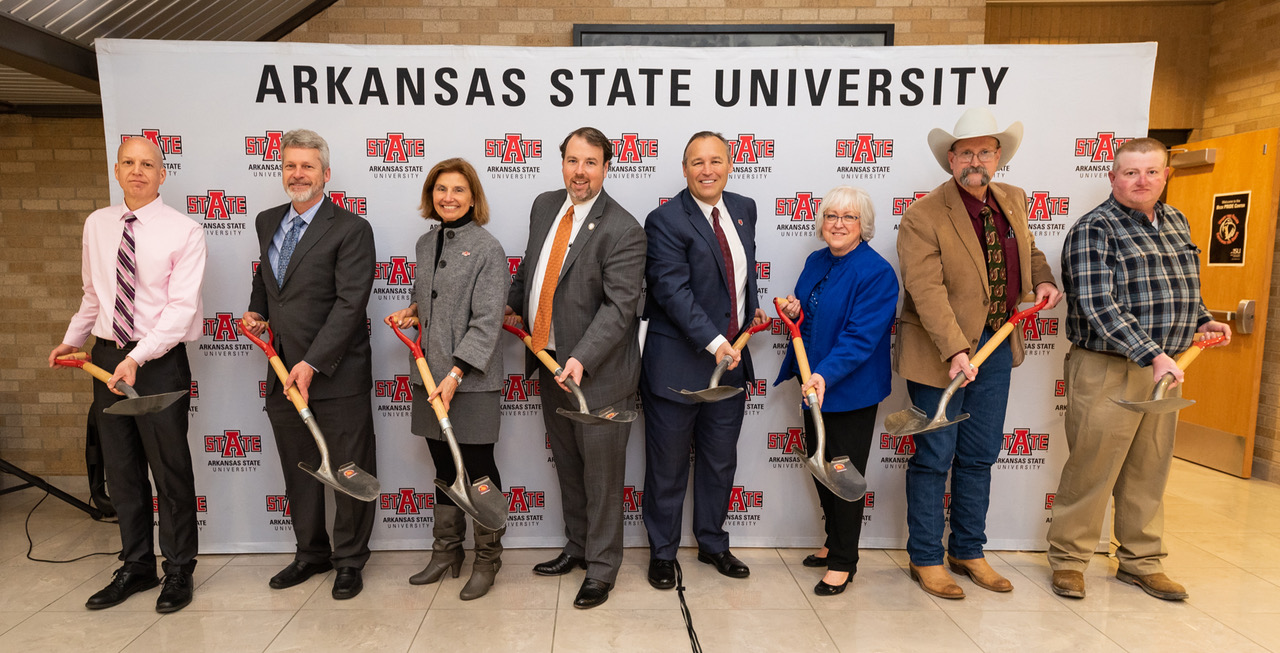 JONESBORO – Officials gathered for a construction launch ceremony for the disaster training pavilion facility in Imboden Friday afternoon in the lobby of the Donald W. Reynolds Center for Health Sciences on the campus of Arkansas State University.

The ceremony, originally scheduled at the site south of the Imboden city limits and bordered by Highway 63 and the Burlington Northern Santa Fe (BNSF) railroad, was moved due to the possibility of inclement weather. “Today, we celebrate the start of construction on the opening phase of a disaster training facility,” said Arkansas State Chancellor Kelly Damphousse. “This is much more than a teaching laboratory for A-State students. Since 2005, the Regional Center for Disaster Preparedness Education has worked hand-in-hand with local agencies to provide that education.

“With our bachelor’s and master’s degree programs and community projects like the disaster training facility, we are educating the next generation of leaders in this vital service area for our cities, towns and counties.”

The construction of the pavilion is made possible by a grant from the Delta Regional Authority. The grant is for $150,000 and provides the cost of the pavilion, parking lot and materials for constructing the road from the gate to the pavilion. Caldwell said the funds will not just make an impact on construction, the local economy, and people who will come and train from all over, but could ultimately mean life or death for people.

“The Delta Regional Authority has a strong relationship with Arkansas State University,” said Caldwell. “What we celebrate today is going to greatly strengthen our regional infrastructure and our work force. The water rescues in Arkansas are probably more prevalent than we realize, especially in this part of the state. To be able to have these resources here will not only strengthen infrastructure for Northeast Arkansas, but the whole state.

“This is a great example of a strong partnership which is one of our primary focuses at DRA. Everyone working together has resulted in this. It’s easier to accomplish a whole lot more together.”

Arkansas State student Casey Williams of Vilonia spoke to the gathering on behalf of the DPEM students. Williams, a junior majoring in disaster preparedness and emergency management and pursuing an accelerated master’s degree, said, “Having the opportunity to participate in hands-on training is very important to us, learning about disaster preparedness.

“We can take what we learn in the classroom and turn it right over into our training facilities. In the past, we’ve had to travel many hours out of state to achieve the same type of training, so having the disaster training facilities in Imboden and Walnut Ridge, we can train with the best of those around us and do it more frequently since we won’t have to travel quite as far.”

On Sept. 18, 2017, A-State Chancellor Damphousse signed a long-term land lease agreement with the two mayors to develop the sites at Imboden and Walnut Ridge. Persell noted, “Without these leases, this entire project would still be a dream. At the same time, many others havecome along to contribute to the planning and development.”

“Everyone has been supportive,” added Persell. “An advisory board has been meeting annually for three years and the Arkansas Department of Emergency Management has been very helpful in this process. The Governor’s Office has written letters of support for a couple of grant applications and the Delta Regional Authority has funded the first piece of infrastructure. This means training can begin and have a positive impact on the region and state’s emergency preparedness.”

According to Persell, the master concept for a disaster training facility has developed over the past three years.

“As the training and education offerings and needs by the Disaster Preparedness and Emergency Management Department progressed, and in concert with those DPEM networks, it became clear a training facility of this type was not available in this region, state or even some of our neighboring states,” she stated.

“There are several federal facilities that focus on addressing the national threats realized by weapons of mass destruction, but it was harder to find a facility that focused on the everyday disasters and emergencies first responders routinely deal with, such as flooding, tornadoes and earthquakes. Thus, the master concept focuses on the threats prominent in the region and state’s hazard vulnerability analysis and targets those who would be planning and preparing to respond, mitigate disasters, actually respond and help recover from these disasters and other emergencies.”

Students will be welcome to participate in any of the training provided at the site. There may be times they join trainees or the training may be for the students only in some cases. A-State faculty or other subject matter experts may be involved in the training.

The Regional Center for Disaster Preparedness Education program was instituted at A-State in 2005. The department now offers degrees in disaster preparedness and emergency management (associate of applied science, bachelor of science and master of science); healthcare emergency management (graduate certificate); homeland security and disaster preparedness (minor); and paramedic (certificate of proficiency in EMT and associate of applied science in paramedic).

The Imboden site is nearly 200 acres and will eventually be home to multiple training zones where many different types of training could occur simultaneously (energy, search and rescue, tactical and rail emergencies.) The open-air pavilion is intended to accommodate up to 30 people at one time and can be used for training in an appropriate outdoor environment, such as a water rescue.

Expansion of the facility will be made through grants, philanthropic contributions and revenue generated by various trainings by a per person cost or a charge to an organization wishing to use the facility to deliver its own training curricula. The pavilion is projected to be completed by the end of June, depending upon how weather impacts the construction process.

Original article source: http://www.astate.edu/news/a-state-holds-imboden-disaster-facility-construction-launch | Article may or may not reflect the views of KLEK 102.5 FM or The Voice of Arkansas Minority Advocacy Council