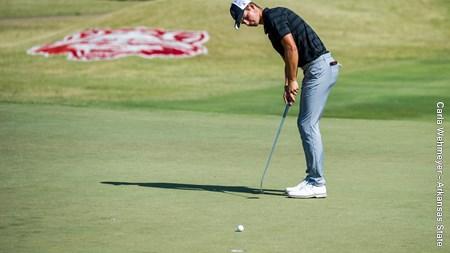 PARADISE ISLAND, Bahamas (10/28/22) – All five Arkansas State men’s golfers turned in par or better rounds to see the Red Wolves atop the leaderboard after the first round of the White Sands Bahamas Invitational hosted by VCU at the Ocean Club Golf Course.

A-State turned in a season-best round of 14-under par 274 to open the tournament and leads No. 38 Duke by two strokes. Stetson, ranked No. 56 in the latest Golfstat team rankings, is third at 11-under par with Sam Houston State and No. 44 Southern Miss tied for fourth at 9-under par. The 12-team field played the par-72, 7,159-yard course at an average of 4.9 strokes under par. The Red Wolves were a combined 13-under par on the par 5s and 5-under par on the par 4s.

Luka Naglic and Jack Madden paced the Red Wolves as each turned in a 4-under par 68 in the first round to tie for seventh. Naglic had one bogey on his card to go along with five birdies while Madden had six birdies and a pair of bogeys. Thomas Schmidt and Jack Maxey finished the opening round at 3-under par 69 to tie for 14th. Schmidt had a team-high seven birdies on the round while Maxey rolled in six. Devyn Pappas turned in an even-par 72 to tie for 34th to round out the team scorers while Pierce Johnson is tied for 59th at 3-over par playing as an individual.

The second round begins at 7:00 a.m. (CT) Saturday with the third and final round Sunday at the Ocean Course Golf Club. For the latest on A-State men’s golf, follow the team on Twitter (@AStateMGolf), Facebook (/AStateGolf) and Instagram (@astatemensgolf).

Continued here:
A-State Holds First Round Lead at White Sands Bahamas Invitational. Article may or may not reflect the views of KLEK 102.5 FM or The Voice of Arkansas Minority Advocacy Council