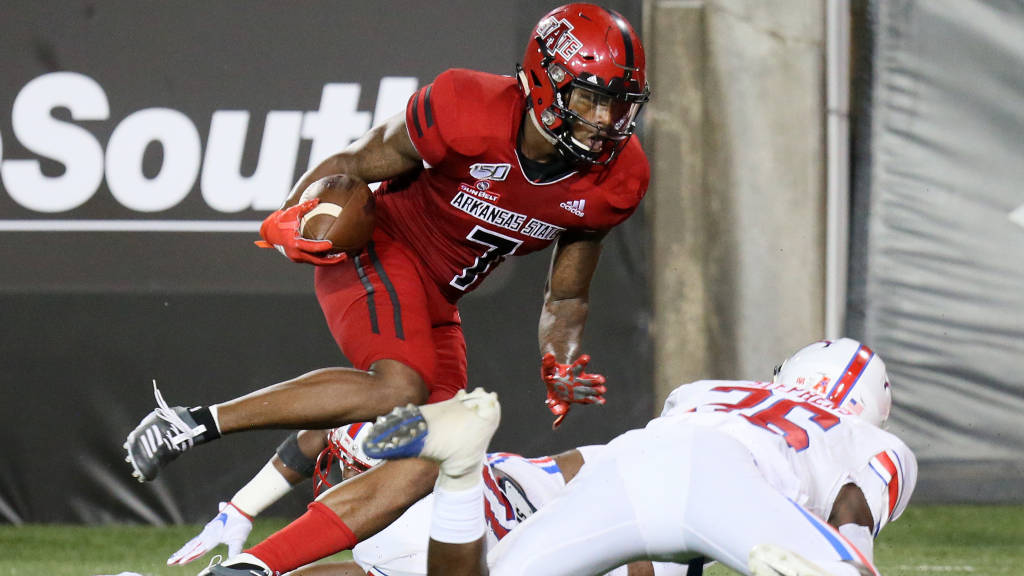 ON TAP:  Arkansas State is set to play UNLV Saturday at 9 p.m. (CT) at Sam Boyd Stadium in its first road contest of the season, which will be produced by STADIUM and appear live on Facebook via the @WatchStadium account.  Every Red Wolves football game can be heard live on 107.9 FM in the Northeast Arkansas area.  The live radio broadcast can also be accessed on the official A-State Athletics web site (AStateRedWolves.com) and the A-State Athletics app.

THE PRINCIPALS:  The Red Wolves will close out a home-and-home series with UNLV when it faces the Rebels in Las Vegas for the first time since the two teams initial meeting in 1995.  A-State is coming off a 37-30 home setback last Saturday against SMU, while UNLV picked up a 53-26 win over Southern Utah at Sam Boyd Stadium in its season opener.

FOREVER IN OUR HEARTS:  The Arkansas State Athletics Department family was saddened to learn of the passing late Monday night, Aug. 19, of Wendy Anderson, wife of sixth-year head football coach Blake Anderson.  Wendy’s courageous battle with cancer will continue to serve as an inspiration to many across the nation, and the outpouring of support far and wide for the Andersons and the A-State family has been overwhelming.  Coach Anderson has taken a leave of absence to be with his family during this difficult time.

DUGGAN NAMED INTERIM HEAD COACH:  Assistant head coach and defensive coordinator David Duggan was named A-State’s interim head coach on Monday, Aug. 19, until Blake Anderson decides to resume his activities as head coach.  A-State Vice Chancellor for Intercollegiate Athletics Terry Mohajir remains in communication with Coach Anderson both on a personal and professional level and has stated that A-State “will obviously respect and honor any amount of time he needs before he feels he can return.”

INTERIM HEAD COACH DAVID DUGGAN:  Currently serving in the interim head coach role at A-State, assistant head coach and defensive coordinator David Duggan is in his first season with the Red Wolves.  While he holds a 10-9 all-time record as a head coach in NFL Europe and possesses 26 years of collegiate coaching experience, he is currently serving as an acting head coach at the collegiate level for the first time of his career.  He came to the Red Wolves after spending the previous three seasons at Western Michigan, where he helped lead the program to a pair of bowl games, a Mid-American Conference championship and a combined 26-13 record.  His initial year saw the Broncos post an undefeated 13-0 regular-season record, a final No. 12 ranking and a berth in the Cotton Bowl, where it dropped a narrow 24-16 decision to Wisconsin.

THE ARKANSAS STATE-UNLV SERIES:  Although the Red Wolves and Rebels will play each other for the second straight season, this will be just the third all-time meeting between the two programs.  A-State claimed a 27-20 home victory against UNLV last season, while the Rebels collected a 28-23 win in Las Vegas in 1995 when both teams were a member of the Big West Conference.

OLD TIES:  While Saturday’s game will be the third all-time meeting between A-State and UNLV, it will be just the second non-conference tilt between the two schools.  The first meeting came in 1995 while both teams were a member of the Big West Conference, which they shared from 1993-95.

A RECORD-TYING PERFORMANCE:  Senior WR Omar Bayless set new career highs for receptions (10), receiving yards (132) and receiving touchdowns (12) last game against SMU.  His touchdown receptions tied both the school and Centennial Bank Stadium records, while it tied the second most in Sun Belt history.  The only other A-State player to post four receiving touchdowns in a game was Alfred Bentley (vs Central Missouri State in 1959).  The only other player to ever post four receiving touchdowns at Centennial Bank Stadium was Troy Edwards of Louisiana Tech in 1998.  His touchdowns total were just one shy of the Sun Belt record held by Casey Fitzgerald of North Texas.  Bayless became the fifth player in league history to post at least four touchdown receptions in a game.

CAREER NIGHT:  Not only did senior wideout Omar Bayless set new career-best marks for receptions and receiving yards against SMU, junior receivers Brandon Bowling and Jonathan Adams also did the same.  Bowling ended his night with 12 receptions, which tied the fourth most in school history, and 92 yards, while Adams was responsible for eight catches covering 84 total yards.

DELIVERING IN HIS DEBUT:  Earning his first career start against SMU, junior QB Logan Bonner threw for a career-high four touchdowns, while he also set new career-best marks for completions (32), passing yards (324) and total offense (340).  His 32 completions and four touchdown passes both tied the seventh most in A-State history for a single game.  Athlon Sports ranked Bonner’s performance as the 21st best in the nation among quarterbacks who made their first career start last week.

ON THE STOP:  Well known for his coverage abilities, it was junior cornerback Jerry Jacobs’ career-high 13 tackles that stood out during the SMU game.  Not only did his 13 tackles lead the team, they tied the highest total by an A-State player for all of last season.

WATCH ME, WATCH ME:  A-State has 10 players on at least one major watch list for the 2019 season, including six who play on the offensive side of the ball (Logan Bonner, Dahu Green, Javonis Isaac, Kirk Merritt, Marcel Murray, Jacob Still), three on the defensive (Tajhea Chambers, Darreon Jackson, Jerry Jacobs) and one on special teams (Cody Grace).  The Red Wolves have at least one player on 11 different watch lists.

EIGHT STRAIGHT:  Arkansas State has secured a winning record in a school-record eight consecutive seasons (2011-18).  The next longest streak was six straight seasons from 1912-17.  The Red Wolves have piled up 67 victories from 2011-18 for its most over an eight-year span in the program’s 105-year history.

ELITE COMPANY:  Arkansas State is one of just four teams in the nation to win five conference titles and appear in eight bowl games since 2011, joining Alabama, Clemson and Oklahoma.  The Red Wolves won the Sun Belt title in 2011, 2012, 2013, 2015 and 2016 and hold the 15th longest active streak in the nation for bowl game appearances with eight.

A-STATE vs THE SUN BELT:  Arkansas State has won 51 of its last 63 Sun Belt Conference games (.810 winning percentage) to run its all-time record in the league to 83-48.  The Red Wolves hold their most all-time victories against ULM with 26.  A-State has defeated every team in the conference since the football league was formed in 2001.  Along with ULM and Louisiana, A-State is one of three teams that have been a part of the conference since its inaugural football season.

SUN BELT CHAMPS (5 of 8):  While Arkansas State last won the Sun Belt in 2016, it is still the only Group of 5 program and one of just four FBS programs in the nation to win five conference championships over the last eight years (2011-18).  The only other teams to do so are Alabama (SEC), Clemson (ACC) and Oklahoma (Big 12).  The Red Wolves most recently won back-to-back Sun Belt titles in 2015 and 2016, compiling a 15-1 league record over that span.  A-State also won the league title 2011-13, making it one of just two programs in league history with at least five SBC titles.

BOWL STREAK:  Arkansas State has made a school-record eight consecutive bowl-game appearances (2011-18), which is the third longest streak in the Group of 5 and ranks 15th in the nation among all FBS programs.

A LOOK BACK:  With a 3-1 record, Arkansas State secured a winning record last season against non-conference opponents for the first time since 1995, when it went 3-2.  Additionally, with wins against Tulsa and UNLV, the Red Wolves won back-to-back non-conference games against FBS opponents for the first time ever since moving to FBS status in 1992.

400-PLUS:  Arkansas State has hit the 400-yard total offense mark 44 times over its last 65 games (67 percent) since 2014, which was Blake Anderson’s first season as head coach.  The Red Wolves have posted 400 or more yards total offense in each of their last eight games.

A LOSS ON THE PLAY:  Dating back to the 2015 season, the Red Wolves have posted at least five stops behind the line of scrimmage in 40 of their last 43 games.  A-State has ranked among the top 20 teams in the nation each of the last three seasons (2016-18) in tackles for loss.

GETTING TO THE QUARTERBACK:  A-State has ranked among the top 27 teams in the nation in sacks four of the last five years (2014-18), posting a combined 177 sacks over that span.  The Red Wolves have recorded at least one sack in 37 of their last 38 games dating back to the 2016 season.

Original article source: http://www.astateredwolves.com//ViewArticle.dbml?DB_OEM_ID=7200&ATCLID=211810865 | Article may or may not reflect the views of KLEK 102.5 FM or The Voice of Arkansas Minority Advocacy Council