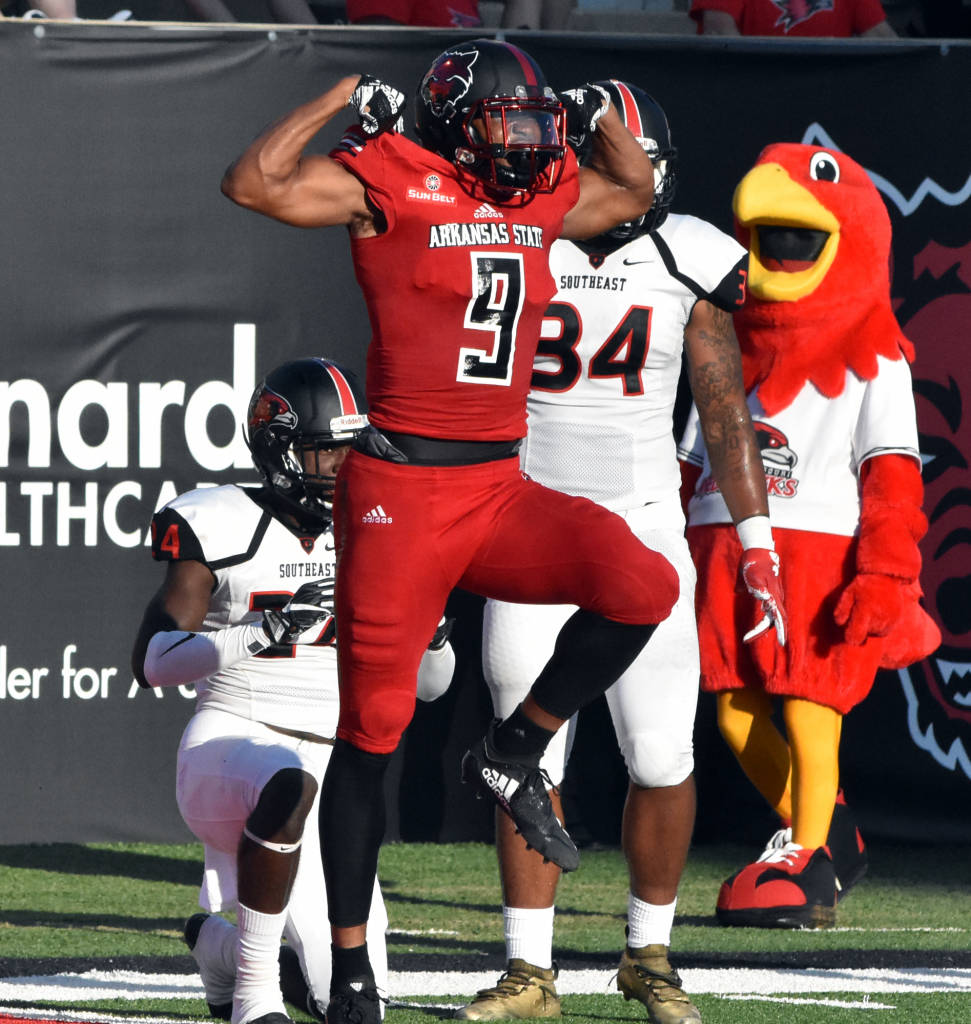 ON TAP: Arkansas State is set to play its first road game of the season Saturday, when it will face defending national champion and No. 1-ranked Alabama in a 2:30 p.m. game that will be televised on ESPN2.  Every Red Wolves’ football game can be heard live on 107.9 FM in the Northeast Arkansas area, and the live radio broadcast can also be accessed on the official A-State Athletics web site (AStateRedWolves.com) and the A-State Athletics app.

THE PRINCIPALS:  The Red Wolves claimed a 48-21 home victory last week against Southeast Missouri State, collecting its first season-opening victory since 2014.  The preseason Sun Belt Conference favorite in the league’s annual coaches poll, A-State entered the season receiving votes in both Associated Press Top 25 and Coaches Poll for the first time since gaining FBS status in 1992.  Alabama picked up a 51-14 season-opening victory over Louisville and will carry a 16-game winning streak in home openers into Saturday’s game.  A-State  will make its second all-time apperance at Bryant-Denny Stadium, where the Crimson Tide boasts the fourth-best all-time home winning percentage in FBS at .827 (259-53-3) since the stadium opened in 1929.

FIVE YEARS RUNNING:  Despite A-State being just one game into the 2018 season, Blake Anderson is already just the second head coach in Arkansas State history to win 32 or more games over his first five seasons at the school.  He needs one more win to hold the most victories by any A-State coach over his first five seasons at the school.  Additionally, he is just the third head coach at A-State to direct the program to 32 wins in 52 or fewer games — Bennie Ellender reached 32 victories in 52 games from 1963-68, while Bill Davidson claimed 32 wins over his first 51 games between 1971-75.

THE ARKANSAS STATE – ALABAMA SERIES:  Arkansas State and Alabama have met twice before with Alabama claiming 34-7 victory in 1982 and, most recently, a 35-0 win in 2008 when the Crimson Tide was ranked No. 2 in the nation.  While the two squads will meet for the third time, Saturday’s game will be just the second between the two teams at Bryant-Denny Stadium.  The 1982 game was played at Birmingham’s Legion Field with Larry Lacewell serving as A-State’s head coach and Bear Bryant leading the Crimson Tide.  Both attended Fordyce (Ark.) High School and Lacewell served as a graduate assistant coach at Alabama under Bryant during the 1959 season.  Announced prior to this season, a new “Larry Lacewell Award” has been created that will feature the names of future A-State Football MVP’s.  Lacewell, Arkansas State’s all-time leader in coaching victories, led the program to the 1986 national championship game.

A-STATE vs. SEC:  The Crimson Tide will be Arkansas State’s sixth SEC opponent over the last six seasons after facing Auburn in both 2016 and 2013, Missouri in both 2015 and 2013 and Tennessee in 2014.  Although A-State has never defeated a team while it was a member of the SEC, it has picked up victories over two current schools prior to them joining the league.  The Red Wolves defeated Ole Miss 10-0 in 1915 and also tied the Rebels twice.  A-State defeated Texas A&M in 2008 as well while the Aggies were a member of the Big 12 Conference.  A-State has played Ole Miss 23 times, more than any other current SEC member.

TAKING ON THE CHAMP:  Arkansas State will play a defending national champion for the first time since 2004 when it played then-ranked No. 4 LSU following its 2003 title season.  Like Alabama, A-State also played LSU in the second game of its 2004 season.

ALABAMA RED WOLVES:  The Red Wolves have seven players on their roster from the state of Alabama, the third most among all states outside of Arkansas.  A-State has 13 players on its roster from the state of Texas and eight from Missouri.  Out of the seven players from Alabama, six of them are listed on A-State’s current depth chart and all but one have started at least one career game.

HOME OPENERS:  With its win over Southeast Missouri State, Arkansas State has now won its first game at Centennial Bank Stadium 12 of the last 14 seasons dating back to 2005.  The Red Wolves stand 32-13 all-time in home openers at the stadium and are also 18-8 in such games since moving to FBS status in 1992.

TAKING ON THE TOP 25:  Arkansas State is set to play a top-25 ranked opponent at the time of the game for the first time since going on the road to defeat No. 25 Troy in 2016.  The Red Wolves only other victory over a top-25 team since joining the FBS in 1992 came against No. 25 Kent State in the 2013 GoDaddy Bowl.

AN A-STATE VICTORY WOULD . . . :  give the Red Wolves their first 2-0 start to a season since 2008 . . . mark its second win over a high resource (Power 5) conference team since moving to FBS status in 1992, and its first since defeating Texas A&M in 2008 while the Aggies were a member of the Big 12 Conference . . . give the Red Wolves their first win over an SEC opponent . . . mark the third time A-State has defeated a top-25 opponent over the last six seasons . . . snap Alabama’s 16-game winning streak in home openers.

104TH SEASON:  Arkansas State kicked off its 104th season of football Sept. 1 at home against Southeast Missouri State.  A-State holds a 466-481-37 record since the inaugural season and has played in 15 bowl games.  A-State did not field a team from 1942-44 due to World War II.  Arkansas State also didn’t have a team in 1918 as World War I was ending.

JUSTICE SERVED:  Senior quarterback Justice Hansen was named the Sun Belt Conference Offensive Player of the Week on Monday, recognizing his record-setting performance against Southeast Missouri State.  He set a school record with six touchdown passes and finished the night 26-of-36 passing with 423 yards.  All six touchdowns went to different receivers, and he became the first Sun Belt quarterback to toss six or more touchdown passes since Giovanni Vizza of North Texas had eight against Navy on Nov. 10, 2007.

400-PLUS:  Arkansas State has hit the 400-yard total offense mark 34 times over its last 52 games (65 percent) since 2014, which was Blake Anderson’s first season as head coach.  The Red Wolves went over 400 yards in nine of its 12 games last season.  A-State averaged a school-record 494.8 yards per game, which ranked 10th in the nation last season.

QUARTERLY REPORT:  Last season, A-State scored at least three points in 40 of 48 quarters  for an .833 percentage that was the highest under head coach Blake Anderson.  A-State’s second highest percentage of quarters scored under Anderson came in 2014, when it put points on the board in 43 of 52 quarters for an .827 percentage.  The Red Wolves scored in three quarters during their 2018 season opener.

HITTING THE MARK:  Junior quarterback Justice Hansen has thrown at least one passing touchdown in 18 consecutive games and two or more touchdown passes in 14 of his last 15 outings.  He has thrown multiple scoring passes in 18 career games.  The former Oklahoma transfer has thrown for at least 200 yards 20 times, 300 ten times and 400 five times during his three-year career at A-State.  Dating back to the 2015 season, Hansen has passed for at least 200 yards his last 14 games and in 18 of his last 20.

A LOSS ON THE PLAY:  Dating back to the 2015 season, the Red Wolves have posted at least five stops behind the line of scrimmage in 29 of its last 30 games.  A-State posted a season-high 13 tackles for loss in 2017 versus Texas State and has now recorded at least 10 in five of the last eight games.

GETTING TO THE QUARTERBACK:  A-State has ranked among the top 20 teams in the nation in sacks four of the last five years, including the last three in a row (2016-18) when it posted a combined 82 sacks over that span.  The Red Wolves have recorded at least one sack in 25 consecutive games dating back to the 2016 season.

PLAYING THE PERCENTAGES:  A-State has consistently put up strong defensive numbers in third and fourth-down situations over the last five seasons (2014-18), ranking no worse than 36th nationally in either category every year.  The Red Wolves’ best third-down ranking (for a full season) came in 2015 at No. 19, while they finished among the top 10 teams on fourth down each of the last two seasons (2016-17).

PICK IT OFF:  A-State has proved to be an opportunistic defense the previous four seasons (2014-17) when the ball has been put in the air, intercepting a combined 67 passes over that time that ranked as the fourth most in the nation over that span.  The only teams with more interceptions were San Diego State (77), Louisville (71) and Ohio State (71).

FORCING TURNOVERS:  Arkansas State has recorded at least one turnover gained in 43 of 52 games (83 percent) under defensive coordinator Joe Cauthen.  The Red Wolves have ranked among the top 29 teams in turnovers gained three of the previous four years as well (2014-17), and their combined 108 forced turnovers over that span were the fifth most in the nation.

Original article source: http://www.astateredwolves.com//ViewArticle.dbml?DB_OEM_ID=7200&ATCLID=211770692 | Article may or may not reflect the views of KLEK 102.5 FM or The Voice of Arkansas Minority Advocacy Council