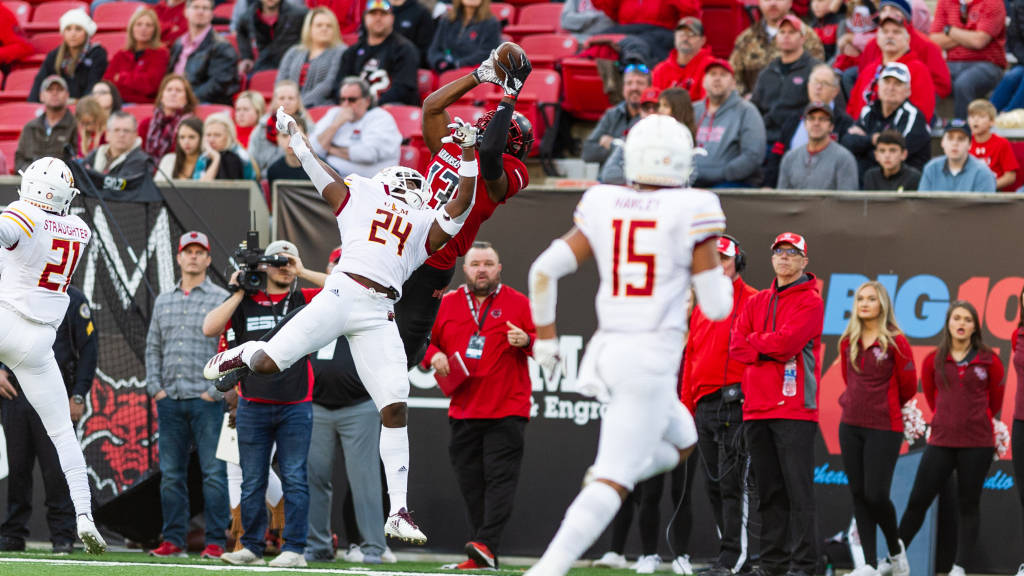 JONESBORO, Ark. (11/17/18) – The Arkansas State football team moved into a tie atop the Sun Belt Conference West Division standings Saturday night with a 31-17 victory over Louisiana-Monroe at Centennial Bank Stadium.

Senior quarterback Justice Hansen threw three touchdown passes and senior defensive back Justin Clifton came up with a pick-six to help lead the Red Wolves to their third consecutive victory.  A-State picked up its ninth straight win versus ULM to improve its overall record to 7-4 and its league mark to 4-3.  With the loss, ULM now stands 6-5 overall and 4-3 in conference action.

The Red Wolves went over 400 yards total offense for the fifth consecutive game, while their defense limited their third straight opponent under 300 yards and no more than 17 points.  A-State finished with 404 yards, including 246 through the air and 158 via the ground game.  ULM totaled 276 yards and was intercepted three times, twice by Clifton and once by sophomore safety Demari Medley.

“I’m really proud of the way our guys played in all three phases of the game,” said A-State head coach Blake Anderson.  “I though the game plan was well thought out, and we talked a lot about total team strategies against this particular opponent.  When we attacked them, you could really see the way it played out on the field.

“We took a step forward and gave ourselves an opportunity to finish 8-4 and hopefully get some help to get into the Sun Belt (Conference) championship game.  I think we’re a better team than we were a month ago, and I have to give the guys credit for continuing to work and not giving up on things.”

A-State put the game’s first 10 points on the board, scoring on a 49-yard pass from Hansen to junior wide receiver Kirk Merritt with 4:41 left in the first quarter and a 26-yard field goal by freshman Blake Grupe at the 7:58 mark of the second quarter.

ULM responded with a six-play, 81-yard drive following Grupe’s field goal to cut A-State’s lead to 10-7 with 5:25 remaining in the half.  Warhawks’ quarterback Caleb Evans completed a 34-yard touchdown pass to Josh Pederson to cap the drive.

However, A-State made its final possession of the first half count as it put together a 77-yard touchdown drive consuming 4:47 off the clock to take a 17-7 lead at the break.  Merritt came up with his second scoring catch of the night, this one covering seven yards.

The A-State defense came up big to start the second half as Clifton intercepted Evans on ULM’s first possession and returned it 43 yards for a touchdown, increasing the lead to 24-7.  A 41-yard return on the ensuing kickoff set ULM up at its own 47-yard line to start its next drive.  The Warhawks were able to take advantage of the return as they completed a five-play drive with a one-yard touchdown run by Evans.

ULM was able to make it a one-possession lead with 5:23 remaining on a 37-yard field goal by Craig Ford, but A-State put the final points on the board with 40 seconds left in the third quarter to set the final score.  Facing a 3rd-and-7 at the ULM 10, Hansen found senior wideout Justin McInnis in the end zone to give the Red Wolves a two-score advantage.

With his three touchdowns, Hansen moved into a tie for the second-most career touchdown passes in Sun Belt Conference history with 81 to his credit.  Merritt finished the contest with six receptions for 89 yards, which were both team highs.  Freshman running back Marcel Murray narrowly missed his third 100-yard rushing game of the season, ending the contest with 94 yards on 17 carries.

The Red Wolves will conclude their regular season next Saturday, Nov. 24, with a 3 p.m. game at Texas State.

Original article source: http://www.astateredwolves.com//ViewArticle.dbml?DB_OEM_ID=7200&ATCLID=211781082 | Article may or may not reflect the views of KLEK 102.5 FM or The Voice of Arkansas Minority Advocacy Council