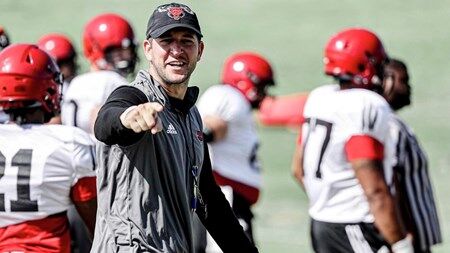 Kilgore, who spent six combined years as a player in the National Football League (NFL) and Canadian Football League (CFL), returns to A-State after previously serving on the Red Wolves’ staff as an offensive analyst during the 2021 season.

“Possessing extensive knowledge of the game through his combined time as a professional player and a coach, Logan has developed a great football mind, strong leadership skills and the ability to effectively communicate with both student-athletes and staff,”  said Jones.  “Logan was a huge asset for our program during his time as an analyst – you could see it then that he was a great fit with our organization.  We’re extremely excited to have Logan back at Arkansas State and to have him, his wife Brookey and their daughter Cooper as members of our Red Wolves family.”

Kilgore most recently spent the 2022 season as the offensive coordinator and quarterbacks coach at Isidore Newman (La.) School, helping lead the football program to an 8-3 record and the quarterfinals of the state playoffs.  He coached highly-decorated quarterback Arch Manning during his senior season, which saw him pass uncles Peyton and Eli Manning on his way to breaking the school record for career passing touchdowns.

Manning was recently announced as the Bobby Dodd national high school player of the year by the Touchdown Club of Atlanta after completing 138-of-227 passes for 2,297 yards and 34 touchdowns with just two interceptions.  He completed his high school career holding every single passing and touchdown record at Isidore Newman.

“Logan Kilgore has been destined to be a coach,” said College Football Hall of Fame member and NFL great Archie Manning.  “He is great with the kids, knows the game of football and is a very a good offensive mind.  I am very proud my grandson Arch had the opportunity to play for him.  He will be a great addition to Coach Jones’ staff at Arkansas State.”

Kilgore went to Isidore Newman following his lone season at A-State, where he worked with the entire offensive staff and especially with the running backs position group and passing game.  The Red Wolves finished the 2021 campaign ranked 11th in the nation in passing offense (313.9 ypg), while running back Alan Lamar was tabbed All-Sun Belt Conference as an all-purpose selection and return specialist.

“My family and I are extremely excited to be heading back to Jonesboro, and we are thankful that Coach Jones has provided an opportunity to be part of the football program and university after our year away,” said Kilgore.  “I look forward to continuing to build on the foundation that Coach Jones and his staff have built over the last two years.  There are exciting times ahead at A-State, and we are thankful to be a part of it!”

Prior to his first stop at Arkansas State, Kilgore was a member of the Edmonton Eskimos team as a quarterback from March of 2019 through March of 2021.  Following his collegiate career as a quarterback at Bakersfield (Calif.) College and Middle Tennessee, he was signed as a free agent by the NFL’s New Orleans Saints.

His professional playing career also included CFL stops with the Toronto Argonauts from 2015-16 and the Hamilton Tiger-Cats in 2017.  His second year with the Argonauts saw him play in seven games, completing 55.3 percent of his pass attempts for 728 yards and two touchdowns.

The California native also served as the quarterbacks coach and pass-game coordinator at Bakersfield College from August 2018 through March 2019.  He came back to the community college where he originally played after graduating from Jesuit (Calif.) High School.

Kilgore threw for 2,512 yards and 22 touchdowns while being named the Northern Conference Offensive Player of the Year his lone season at the school before transferring to Middle Tennessee in 2010.  He spent three years playing at his alma mater, passing for 7,489 yards and 53 touchdowns.  He became the first Blue Raiders player to have three consecutive seasons passing for at least 2,000 yards.

Kilgore earned both his bachelor’s and master’s degree in business administration from Middle Tennessee State University in 2012 and 2013, respectively.

Read more from the original source:
A-State Football Names Kilgore Tight Ends Coach. Article may or may not reflect the views of KLEK 102.5 FM or The Voice of Arkansas Minority Advocacy Council