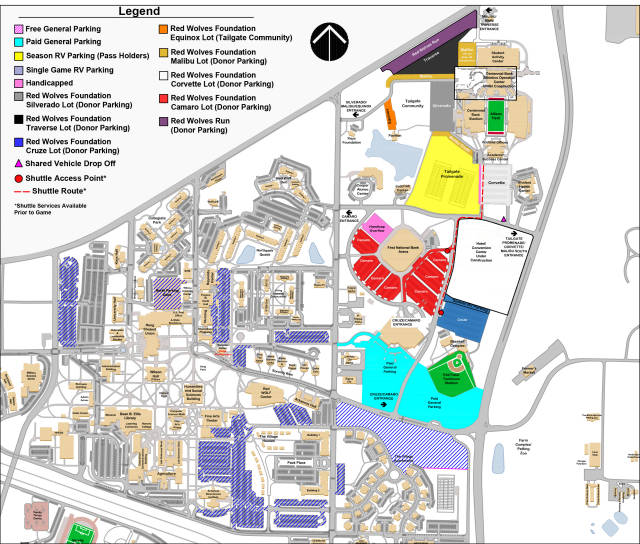 Parking
• Red Wolves Foundation donor lots open at 8:00 a.m.
• $10 general parking is available south of Tomlinson Stadium off Olympic Drive.
• Free general parking is available south of Aggie Road and across the A-State campus.
• Visit RedWolvesFoundation.com for the full parking map.
• New this season is a shuttle service for fans. The shuttle will pick up at the ‘Cruze’ lot (baseball parking lot) and the ‘Camaro’ lot (lot A of First National Bank Arena) and unload at the stadium. The shuttle will begin two hours prior to kickoff, but will not run after the game.
• The Rideshare for Uber, Lyft and student drop off is off Alumni Blvd., just south of the stadium.
• Limited mobility passes can be picked up at the Red Wolves Foundation. The passes are not a parking pass, but allow for drop off closer to Centennial Bank Stadium.

General Stadium Information
• With construction on the premium seating areas of the north end zone facility completed, fans WILL be able to move between the east and west concourses via the north end zone concourse that is ADA compliant.
• No food or drinks can be taken out of the north end zone area or club levels of the stadium.
• Small and mini umbrellas that will fit in bags no larger than 12 inches in height and width and 7 inches in depth will be allowed into the stadium. Large umbrellas that will not fit in a bag with those dimensions will not be allowed into the stadium.
• Fans are encouraged to bring ponchos with them to the stadium.
• Game programs will be available at the entry gates, as well as the marketing booth located in the middle of the west concourse underneath the press box.
• Gate 11 on the northwest side of the stadium will be closed due to construction.

The following items are prohibited from entry into Centennial Bank Stadium:
• Alcoholic Beverages
• Bags larger than 12 inches in height and width and 7 inches in depth
• Large umbrellas that will not fit in the permissible bag size (small and mini umbrellas will be allowed)
• Bottles, Cans or Thermoses
• Chair backs larger than a single seat
• Containers, coolers or ice chests
• Ice Bags
• Laser Pointers
• Noisemakers (bells, horns, whistles or other artificial noisemakers)
• Outside food or drinks
• Guns or weapons of any kind
• Video camcorders or professional camera equipment (zoom lenses, tripods, etc.)

Following back-to-back road games, Arkansas State returns home this week to close out its non-conference schedule against UNLV. The only FBS program in the nation to win five conference championships over the last seven seasons (2011-17), A-State is off to a 2-1 start through three games for the first time since the 2013 season. The Red Wolves will host UNLV, which also brings a 2-1 record into the game, for the first time in school history.

Season tickets can be purchased through the A-State Ticket Office, located at First National Bank Arena’s lower red entrance, in person, by phone at 870-972-2781 or online by visiting AStateRedWolves.com/Tickets.

Original article source: http://www.astateredwolves.com//ViewArticle.dbml?DB_OEM_ID=7200&ATCLID=211772867 | Article may or may not reflect the views of KLEK 102.5 FM or The Voice of Arkansas Minority Advocacy Council