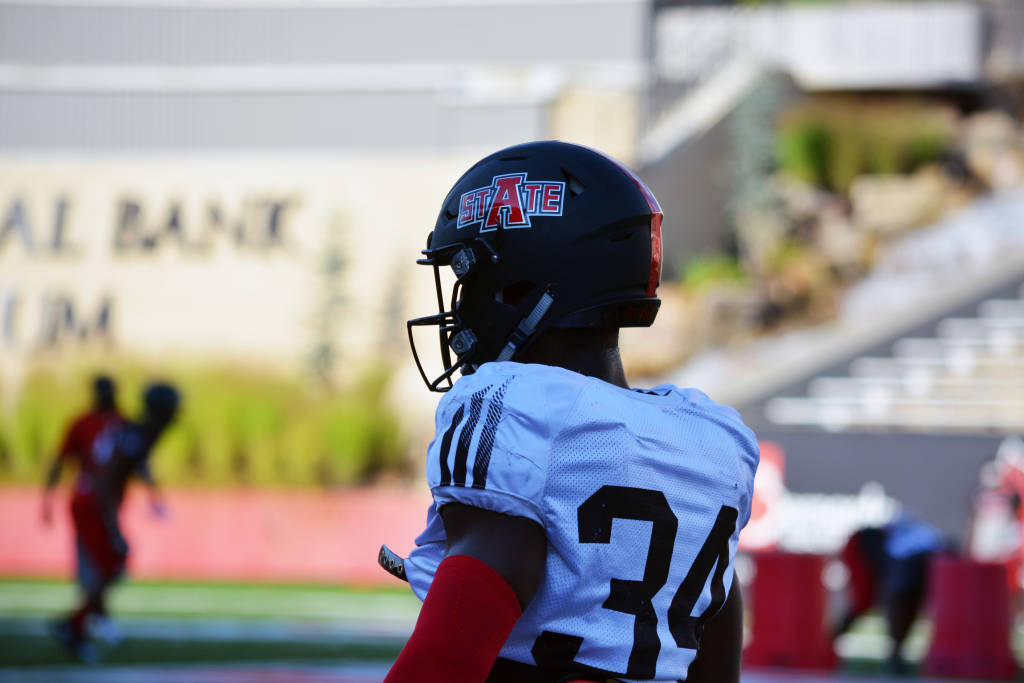 Multiple activities preceded the football team’s 14th practice, including a Red Wolves’ gear sale and autograph and photo opportunities with the A-State volleyball and women’s soccer teams, as well as the spirit squads.  Following the scrimmage, fans were also able to take the field to visit with football squad.

A-State held its first scrimmage last Saturday and its fall camp is winding down this weekend after the team initially reported Aug. 1.  The Red Wolves will open their season Aug. 31 with a 6:00 p.m. home game against SMU.

“We’ve had a really physical camp,” said A-State head coach Blake Anderson.  “We’ve tackled and hit a lot – a little bit more than we did in the previous two camps.  That makes you nervous when you do that, but we made it through healthy.  We’ve had some bumps and bruises, but no one significantly injured who is going to miss (playing time).”

“I wanted to see tonight just improvement from (the scrimmage) last week,” Anderson said.  “We definitely saw that offensively.  I thought we struggled at times last week.  We didn’t protect very well and we dropped a bunch of passes, but obviously came out tonight and played really well, especially early.”

“Defensively, we just challenged them to rally,” Anderson stated.  “There is going to be a game somewhere along the way where the offense just comes out in rhythm and is clicking, and the defense is going to have to respond.  Whether it was offensive mistakes or just the defense picking it up, they got better as the night went on.  That was encouraging just to see some guys step up and respond.”

Highlighted by a 98-yard kickoff return for a touchdown by junior wide receiver Jeff Foreman, the Red Wolves also spent time on special teams throughout a practice that gave a lot of players numerous full-contact reps.

“We played a lot of guys tonight,” said Anderson.  “We limited some of them because of how much we’ve been hitting and how many guys have been dinged up in practice, so it was a lot of mixtures of groups.  It could have become sloppy real quick, but it didn’t, and that was encouraging as well.”

The Red Wolves will play five Saturday games and one nationally-televised midweek contest at Centennial Bank Stadium in 2019.  They will open the season in Jonesboro for the fifth time over the last seven years when they play SMU, but also host Southern Illinois (Sat., Sept. 21), Louisiana (Thur., Oct. 17), Texas State (Sat., Oct. 26), Coastal Carolina (Sat., Nov. 16) and Georgia Southern (Nov. 23).

Original article source: http://www.astateredwolves.com//ViewArticle.dbml?DB_OEM_ID=7200&ATCLID=211809462 | Article may or may not reflect the views of KLEK 102.5 FM or The Voice of Arkansas Minority Advocacy Council