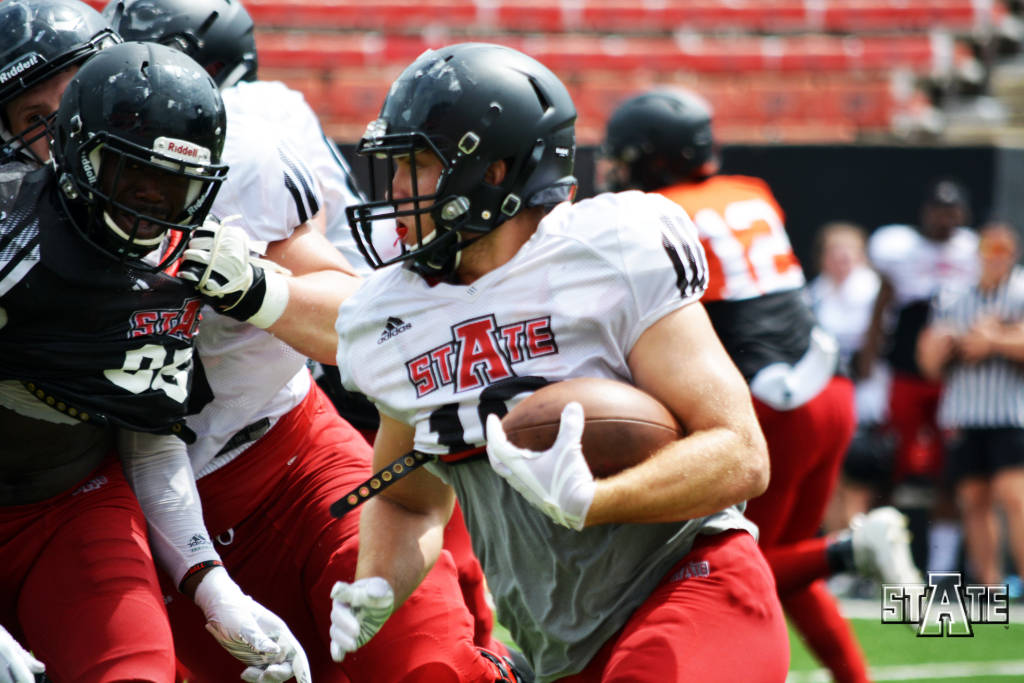 The team took the field in full pads and went through various position drills prior to the start of the scrimmage, which also included dedicated time to the special teams phases of the game.  Following the scrimmage, A-State head coach Blake Anderson met with the media and noted there were good plays on both sides of the ball, but the squad still has a lot to work on.

“We have to become more consistent up front on the offensive line.  We’ve got to pay better attention to the ball up front defensively.  We were giving up too many five-yard penalties jumping offsides.  Today was a good test halfway through (fall camp).”

The defensive effort was partially led by junior linebacker Tajhea Chambers, who finished with eight tackles and an interception.  The defense also came up with 16 tackles for loss and six sacks, including a team-high two by both Bradley-King and junior defensive end Noel Iwuchukwu.

While the offense didn’t reach the end zone, several drives were cut short after reaching a specific number of plays for each possession.  The Red Wolves posted 16 plays that covered at least 10 yards and eight that went for 20 yards or more.

“(The offensive tempo) was good at times,” said Anderson.  “It got a little sloppy towards the end, but little things like just giving the ball back to the official will help a lot.  The officials had to chase the ball way too much today.  Those are things just fine-tuning the offense, but we tried to push the tempo.  I thought the early part of the scrimmage, the offense did a good job clicking.  As we got later into the scrimmage, the defense started playing better on third down than the offense was executing, and it slowed us down – just made it sloppy.”

The Red Wolves reported for fall camp Aug. 1 and held their first practice in full pads on Tuesday, Aug. 6, prior to today’s scrimmage.  The Red Wolves will hold a second scrimmage next Saturday, Aug. 17, at 6:00 p.m. as part of the Athletics Department’s annual Fall Fan Day, which begins with activities starting at 4:30 p.m. in the First Community Bank Tailgate Community.

“The biggest thing (I wanted to see from this first scrimmage) really was just effort,” Anderson said.  “I think we’ve been sporadic with our effort – we’ve talked a lot about what the standard is, and we’re still trying to get it.  I won’t really know until I watch the tape.  It felt good on the field, but until you can really see backside pursuit and how far and how hard we’re running to the ball, it would be hard to make a good assessment.”

Original article source: http://www.astateredwolves.com//ViewArticle.dbml?DB_OEM_ID=7200&ATCLID=211808895 | Article may or may not reflect the views of KLEK 102.5 FM or The Voice of Arkansas Minority Advocacy Council