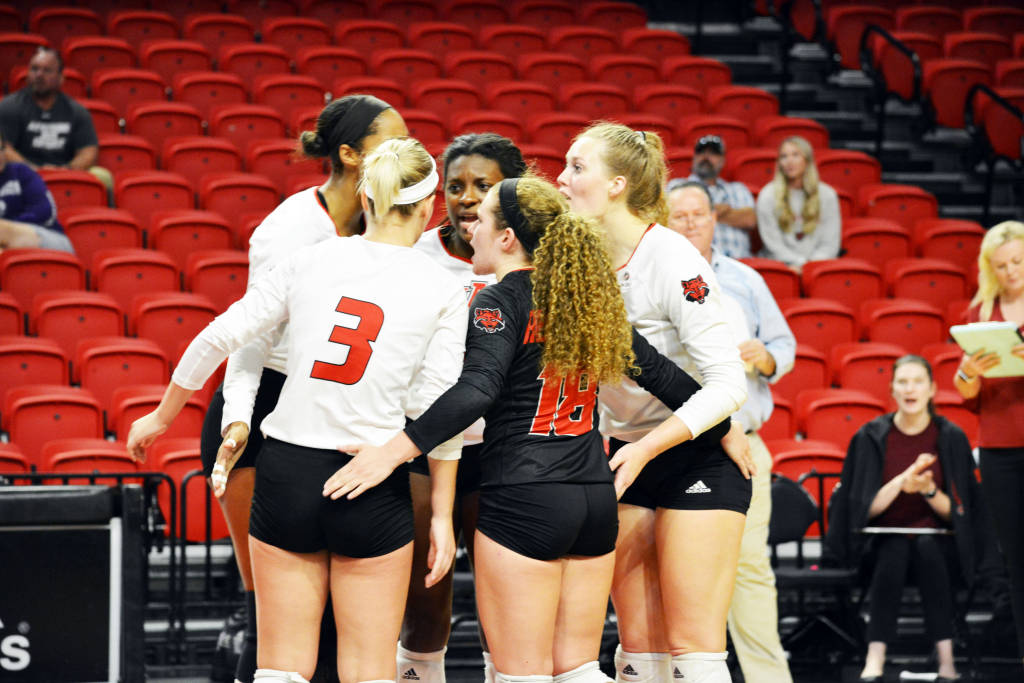 The Red Wolves (13-10, 4-7 Sun Belt Conference) got eight kills apiece from Paulina Sobolewska and Timber Terrell, but the Panthers (8-15, 4-8) had a pair of players record double-digit kills to lead the way.

Set 1 – Georgia State 25-21
In Set 1, Georgia State mounted to an early 4-1 lead that it would not surrender. After extending that lead to 20-12, A-State surged back to cut the deficit to four at 21-17 with a 5-1 run. Facing set point, the Red Wolves held tough to save four set points, but the Panthers would hold on to take the set on a kill by Madelyn Ott.

Terrell paced the Red Wolves with five kills in the set on six attacks. Defensively, Hannah Cox corralled seven digs while Terrell and Josie Stanford teamed up on a block.

Set 2 – Georgia State 25-19
The Red Wolves kept things tight early on in the second set, although the Panthers managed to slowly create some distance between the squads as the set progressed, mounting to a six-point lead at 20-14.

Then, A-State rallied to take four points in a row on three attack errors and a kill by Sobolewska to cut the deficit to 20-18. GSU went on to take five of the last six points to take a two-set lead in the match.

Sobolewska led the Scarlet and Black with four kills in the frame, while Cox added four digs. Brown and Brianna Hollingshed also teamed up on a block. The freshman Hollingshed tallied three kills and a pair of blocks in three sets of action, including starting the last two sets.

Set 3 – Georgia State 25-21
The final set started just like the previous two – back-and-forth with A-State going on a 4-0 run after being down 7-5 to take a 9-7 lead on kills by Cramer, Hollingshed and Sobolewska.

After a pair of 3-0 runs to make it 13-all, the Panthers claimed six of the next nine points to lead 19-16. A-State cut the deficit to 19-18 on a kill by Peyton Uhlenhake and a ball-handling error, but GSU would hold off the Red Wolves’ comeback attempt to take the third set and win the match. A-State saved one match point on a kill by Sobolewska to make it 24-21 before the Panthers closed it out.

Sobolewska led A-State in the final set with four kills to go along with four digs. Cox led the Red Wolves defensively with six digs while Brown added two of her three blocks.

Leah Wilcox and Sydney Stroud led the Panthers with 12 and 11 kills, respectively, while Jordan Shoemaker and Kampbell Hehr piloted the GSU attack with 16 and 13 assists. Lauren Bandera led with 15 digs with Ott adding four blocks on the defensive side.

Original article source: http://www.astateredwolves.com//ViewArticle.dbml?DB_OEM_ID=7200&ATCLID=211815450 | Article may or may not reflect the views of KLEK 102.5 FM or The Voice of Arkansas Minority Advocacy Council