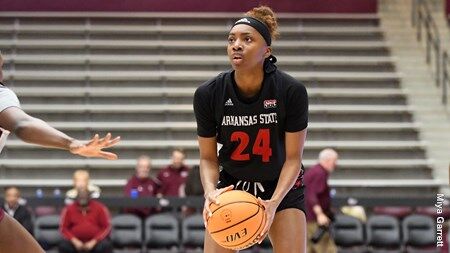 A-State (5-7, 0-1 SBC) trailed by a dozen at the half and pulled within five in the second half, but the Warhawks (5-7, 1-0) hit clutch free throws down the stretch to extend the lead and claim the win in both teams’ league opener.

Lauryn Pendleton recorded her second double-double of the year – the third of her career – with a game-high 22 points and 11 rebounds as one of three Red Wolves in double figures. Keya Patton added 14 points, five boards and three assists, while Anna Griffin notched 13 points and eight rebounds.

Arkansas State surged out to an early six-point lead, but ULM closed the first quarter on a 23-5 run en route to holding a 29-17 lead after the first 10 minutes.

The Red Wolves pulled within seven in the second quarter on an inside jumper by Griffin before the hosts expanded their lead out to 13 on a basket by Sutton. ULM led 47-35 at intermission.

A-State scored 11 of the first 15 points of the second half to pull within five on fast break layup by Jade Upshaw at the 5:04 mark. ULM limited the Red Wolves to just one field goal the rest of the period and led 61-49 after three following a buzzer-beating jumper by Sam.

Knight opened the fourth quarter with a jumper to push ULM’s lead out to 14 before A-State clawed back to within nine on a score by Pendleton. The Warhawks closed by making eight of their last 10 at the charity stripe to close out the contest.

The Red Wolves conclude their road trip to open conference play Saturday at Georgia Southern. Tip-off against the Eagles inside Hanner Fieldhouse is set for 1 p.m. CT on ESPN+. The radio broadcast can be heard live via the EAB Red Wolves Sports Network station 95.3 and 96.9 The Ticket Radio Network.

Continued here:
A-State Falls at ULM in Sun Belt Conference Opener. Article may or may not reflect the views of KLEK 102.5 FM or The Voice of Arkansas Minority Advocacy Council