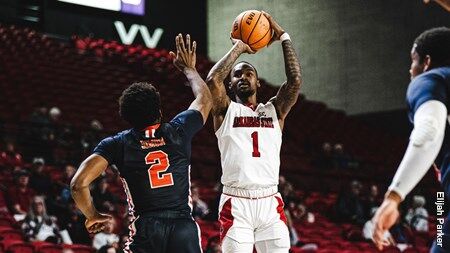 A-State faced a four-point deficit at the break, 31-27, after the Trojans shot 39 percent (11-28) in the opening half compared to 38 percent (11-29) for the Red Wolves. A four-point lead was the largest in the opening frame for A-State, leading 16-12 at the 10:47 mark. From there, Troy buried three 3-pointers to help build the advantage by the halftime break.

After scoring the first two points in the second half, A-State saw Troy stretch out the lead to eight, 41-33, with 12:54 to play. Five-straight points by Ford Jr. trimmed the deficit to five, 47-42, but A-State was unable to get closer the remainder of the game.

Arkansas State returns to action Thursday, Jan. 12, with a 7:00 p.m. game against Texas State at First National Bank Arena, the first of four consecutive home games.  The contest will appear on ESPN+, and every A-State men’s basketball game can be heard live on the EAB Red Wolves Sports Network, including flagship station 107.9 FM in the Northeast Arkansas area. For the latest on A-State men’s basketball, follow the team on Twitter (@AStateMB), Facebook (/AStateMB) and Instagram (@astatemb).

Continued here:
A-State Falls at Troy 66-54. Article may or may not reflect the views of KLEK 102.5 FM or The Voice of Arkansas Minority Advocacy Council