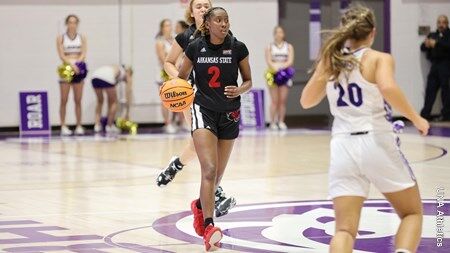 FLORENCE, Ala. (12/8/22) – A rocky fourth quarter was tough to overcome for the Arkansas State women’s basketball team, which fell 82-68 at North Alabama Thursday night inside Flowers Hall.

The Red Wolves shot 39.5 percent (30-76) from the floor, but just 15.4 percent (2-13) from deep and 40 percent (6-15) at the free-throw line. Three players joined Augmon with 10 or more points, with Izzy Higginbottom and Lauryn Pendleton scoring 12 apiece and Kiayra Ellis matching her career high with 10.

Five Lions scored in double figures, led by Emma Kate Tittle’s 23 points on 9-of-17 shooting, including five treys. Hina Suzuki scored 19 points, with four 3-pointers, while Jade Moore also knocked down four from deep in her 13-point outing. Skyler Gill recorded a double-double with 12 points and 11 boards, and Alyssa Clutter added 10 points off the bench.

A-State found success in the midrange game in the first quarter, making seven of its last nine shots in the period, while surviving an early 3-point barrage by the Lions. UNA connected on three treys in the first four minutes before cooling off and making just three of its last 10 attempts. The Red Wolves got six points off the bench from Ellis and shot 58.8 percent from the floor en route to owning a 22-19 edge through one quarter.

Griffin continued to be a force in the paint in the second, grabbing 12 first-half boards and scoring six of her eight first-half points in the period. The Scarlet and Black limited the hosts to just 27.8 percent from the field on 5-of-18, and just 2-for-9 from long range to lead 40-34 at the half.

Augmon netted a pair of transition jumpers within the first minute of the second half to expand the lead to 44-34 and force an early UNA timeout. The Lions then caught fire from deep, hitting five 3-pointers en route to reclaiming the lead and entering the fourth quarter with a 58-55 advantage.

The Lions created distance in the fourth quarter, shooting over 70 percent from the floor (71.4) on 10-of-14 to outscore the Red Wolves 24-15. A-State shot just 6-for-21 (28.6 percent) and could not rally from a double-figure deficit, with North Alabama closing the contest on an 8-0 run.

Arkansas State concludes its three-game road swing with a nationally-televised in-state battle on Sunday, traveling to No. 21/22 Arkansas. Tip-off from Bud Walton Arena is slated for 3 p.m. on SEC Network and the radio broadcast can be heard live via the EAB Red Wolves Sports Network station 95.3 and 96.9 The Ticket Radio Network.

More here:
A-State Falls 82-68 at North Alabama. Article may or may not reflect the views of KLEK 102.5 FM or The Voice of Arkansas Minority Advocacy Council