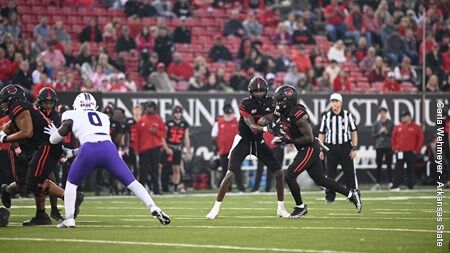 James Blackman completed 16 of 26 passes for 247 yards and two scores while not throwing an interception for the fifth time in six games this season. JMU’s Todd Centeio passed for 394 yards and four scores, completing 28 of 37 passes. Receiver Kris Thornton caught nine balls for 173 yards, but did not score.

Seydou Traore caught three passes for a team-high 73 yards with Jeff Foreman and Te’Vailance Hunt finding the end zone for the Scarlet and Black. Champ Flemings hauled in a team-leading four passes for 56 yards.

Neither team scored in the first quarter, with JMU’s 45-yard field-goal attempt hitting the crossbar. That led to a lengthy A-State drive, highlighted by a 47-yard pass from Blackman to Traore to later set up a successful 25-yard kick by Dominic Zvada, who drilled a pair of field goals to stay a perfect 9-for-9 on the year.

James Madison answered on its next drive with an eight-play scoring drive capped by a 13-yard pass from Centeio to Solomon Vanhorse to make it 7-3 Dukes with 7:40 left in the half. Centeio added another touchdown pass with 26 seconds remaining in the half, finding Devin Ravenel for a 10-yard strike to give JMU a 14-3 halftime lead.

A-State opened the second half with a 13-play drive that ended in Zvada’s second field goal of the night, this time from 37 yards to make it 14-6. After James Madison responded with a 17-yard touchdown run by Percy Agyei-Obese, the Red Wolves answered with a 13-yard pass from Blackman to Foreman to make it 21-13 with 6:13 left in the third.

With 11:39 remaining, the Dukes expanded their lead out to 28-13 with a 9-yard pass from Centeio to Zach Horton. The Red Wolves responded with a touchdown strike of their own – a 4-yard pass from Blackman to Hunt to make it a one-score contest with 10:21 to go.

James Madison closed out the ballgame with 14 unanswered, starting with a 31-yard touchdown run by Agyei-Obese, who finished the night with 158 yards on 21 carries and two scores. After recovering a fumble in A-State territory, Centeio connected with Drew Painter for a 28-yard touchdown pass.

A-State next faces back-to-back road tests, starting with Southern Miss on Oct. 15. Kickoff from M.M. Roberts Stadium is set for 6 p.m. on ESPN+.

Read more here:
A-State Falls 42-20 to James Madison. Article may or may not reflect the views of KLEK 102.5 FM or The Voice of Arkansas Minority Advocacy Council