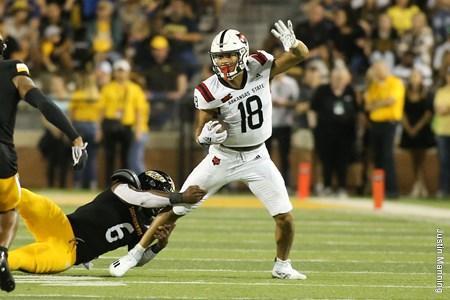 LAFAYETTE, La. (10/22/22) – A balanced attack was difficult to overcome for the Arkansas State football team, which fell 38-18 to Louisiana Saturday night at Cajun Field.

Quarterback AJ Mayer tossed for 155 yards and a second-quarter touchdown to tight end Seydou Traore, who hauled in three passes for 58 yards. Rookie Jaxon Dailey also saw time in reserve, completing 5 of 9 passes for 34 yards. Daverrick Jenkins led the Scarlet and Black with 61 yards on three catches, with one of those going for 53 yards to set up Traore’s touchdown catch.

Defensively, A-State safety Trevian Thomas racked up a career-high 13 tackles to lead all players and forced a fumble recovered by Joe Britton.

Louisiana held a 10-0 lead after the first quarter, scoring on a 43-yard field goal by Kenneth Almendares and a 7-yard touchdown strike from quarterback Ben Wooldridge to receiver Dontae Fleming. That score would be the first of five touchdown passes by Wooldridge, who completed 21 of 34 passes for 315 yards. Fleming hauled in six catches for 81 yards and two scores.

A-State put three on the board midway through the second quarter when Dominic Zvada drilled a 43-yard field goal to make it 10-3. On their next drive, the Red Wolves drove 85 yards in three plays, including a pair of big pass plays. A 53-yard pass from Mayer to Jenkins set up a 27-yard strike from Mayer to Traore. Zvada’s PAT was blocked to keep the Cajuns ahead 10-9.

The Ragin’ Cajuns then scored 28 unanswered through the air, with Wooldridge completing touchdown tosses to Jacob Bernard and Fleming for 45 and 55 yards, respectively, to give the hosts a 24-9 halftime lead. The Louisiana signal-caller found Michael Jefferson for a 36-yard strike early in the third quarter to make it 31-9, then connected with Neal Johnson for a 13-yard scoring pass later to push the lead out to 38-9.

Zvada ended the scoring drought with a 33-yard field goal, moving the true freshman to 12-for-12 on the year. A-State added a final tally with 2:02 remaining in the game when Dane Motley recovered a fumble deep in Louisiana territory, returning it 12 yards into the end zone.

Read more here:
A-State Falls 38-18 at Louisiana. Article may or may not reflect the views of KLEK 102.5 FM or The Voice of Arkansas Minority Advocacy Council