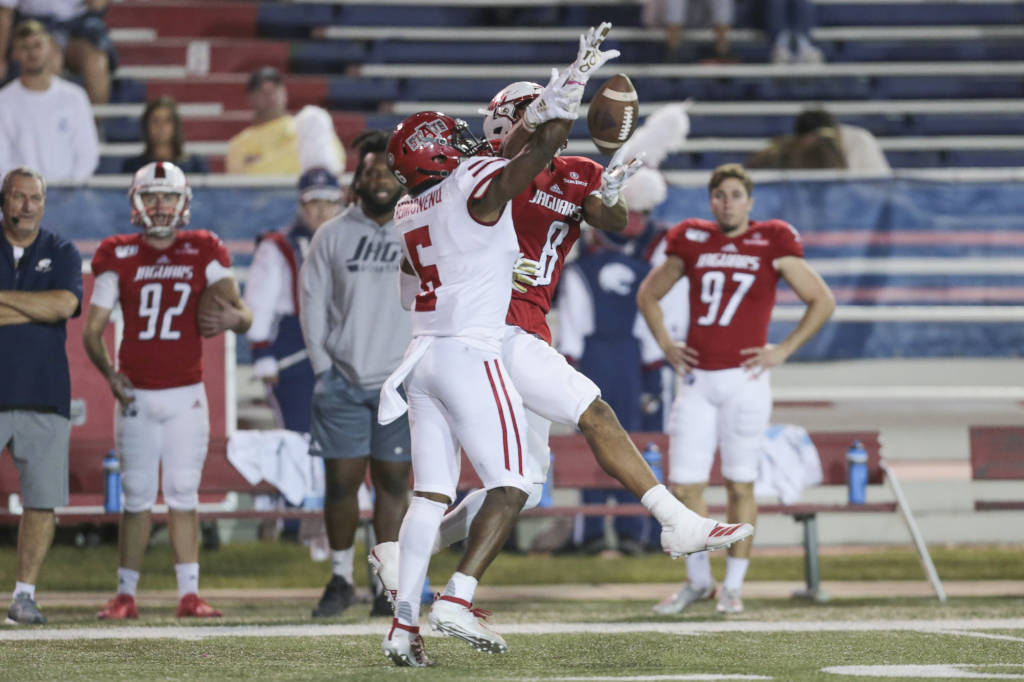 MOBILE, Ala. (11/29/19) – Trailing by 10 points in the fourth quarter, the Arkansas State football team rallied to take a lead, but South Alabama edged the Red Wolves 34-30 at Ladd-Peebles Stadium Friday in the regular season finale.

“It took us a little while to respond when this game got going,” said A-State head coach Blake Anderson. “We were frustrated on both sides early and struggled to get stops and they made some big throws. Fortunately, the guys battled back and made a game of it, but it’s tough to play here. We talked all week about how we were going to get their best game and that’s what we got. We came close, but we have to make plays when it matters.

Short yardage, we were poor on offense. In the red zone, we were poor on offense. Defensively, we had some opportunities to get them off the field, but we missed some tackles in one on one. We lived dangerously and tonight it caught us. We had some other guys go down injury wise and we had to put some guys in positions where they played a lot more snaps than normal. We got exposed a little bit, but you have to give South Alabama credit because they made plays they had to make.”

A-State (7-5, 5-3) finished with 437 yards of offense, 342 of which came through the air. Layne Hatcher was 23-of-38 passing for 342 yards and two touchdowns. Kirk Merritt led A-State with nine catches for 121 yards while Omar Bayless had four catches, including a touchdown, for 98 yards. Jamal Jones led A-State with 61 yards on 16 carries.

South Alabama (2-10, 1-7) had 495 yards of offense, 216 on the ground and 279 through the air. A-State recorded three tackles for loss, including a sack by Tajhea Chambers. Logan Wescott led the Red Wolves with 10 tackles.

Following a Cody Grace punt downed at the South Alabama 1-yard line, A-State’s defense force a three-and-out to for a Jaguars punt. The Red Wolves quickly took advantage of good field position as Hatcher connected with Brandon Bowling twice on a 49-yard drive to give A-State a 7-0 lead. Bowling hauled in a 23-yard reception on third down and a five-yard touchdown catch.

South Alabama scored twice to lead 14-7 at the half. Grupe converted the first of three field goals to make it 14-10 early in the second half, but the Jaguars scored on the ensuing possession. A-State blocked the extra point to keep the deficit at 20-10 with 6:03 to go in the third quarter.

Hatcher found one of his favorite targets as Bayless hauled in his 16th touchdown reception of the season, a 10-yard catch, to make it 20-17 at 2:41 in the third quarter. After a 60-yard scoring drive gave South Alabama a 10-point advantage once again, Hatcher rolled out on play-action and registered his first career rushing touchdown to cap an 8-play, 65-yard scoring drive.

Grupe tied the score at 27 as he split the uprights with a 40-yard field goal with 9:22 to play. A-State moved inside the five, but settled for a 20-yard field goal to take a 30-27 lead with 3:51 to play. The Jaguars marched down the field and grabbed a 34-30 lead with a 9-play, 61-yard drive leaving 1:16 on the clock. After a late hit out of bounds resulted in A-State starting on their 45-yard line, South Alabama sacked Hatcher and forced a fumble to ice the game.

A-State is bowl eligible for the ninth consecutive season, the 15th longest bowl streak in the nation. The Sun Belt Conference has five bowl ties, but invitations have not been extended to anyone in the league yet. Follow AStateRedWolves.com and follow @AStateRedWolves or @AStateFB on Twitter for the most up to date information on bowl destination.

Original article source: http://www.astateredwolves.com//ViewArticle.dbml?DB_OEM_ID=7200&ATCLID=211816587 | Article may or may not reflect the views of KLEK 102.5 FM or The Voice of Arkansas Minority Advocacy Council