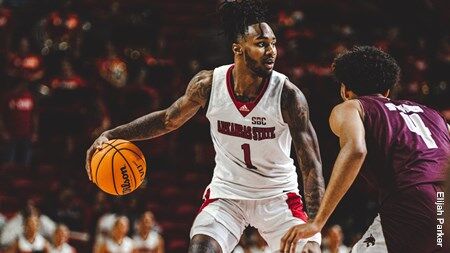 JONESBORO, Ark. (1/12/23) – The Arkansas State men’s basketball team battled back from a 10-point second-half deficit to make it a one-possession game multiple times down the stretch, but the Bobcats were able to hold off the Red Wolves and escape First National Bank arena Thursday night with a 61-58 victory.

A-State (9-9, 1-4) was led by three players scoring in double figures, including Terrance Ford Jr. with a team-high 15 points.  The freshman guard added a career-high five steals and was joined in double figures by Caleb Fields and Markise Davis with 13 points each.

Although both teams knocked down six three-point shots and Arkansas State finished with one more field goal made than Texas State (10-8, 3-2), the Bobcats posted a higher field goal percentage and made five more free throws (15-10).  The visitors shot 45 percent from field in comparison to A-State’s .404 mark.

A tightly-contested first half featured eight lead changes and five ties before the Bobcats took a 28-24 advantage into the locker room.  Texas State broke a 24-24 tie by scoring the last four points heading into the break and wouldn’t trail again.

Still leading by four, 33-29, early in the second half, the Bobcats put together a 6-0 run to claim their largest lead of the night at 39-29 with 16:21 remaining.  A-State responded with an 8-0 run to pull back within two and also trailed by just one possession three other times over final 11 minutes, but could never regain the lead.

Even though Texas State built its lead back to eight points, 59-51, with just 1:38 left on the clock, the Red Wolves kept battling and pulled within three, 61-58, on a Ford three-point basket with two seconds to go.

Ford then got a steal on a deep inbounds pass and called A-State’s final timeout with under one second remaining.  Putting the ball in play under Texas State’s basket, the Red Wolves were forced to take a nearly full-court shot that fell short as time expired.

A-State held a slight advantage on the boards at 32-30 and each team finished with 14 turnovers.  A-State’s Omar El-Sheikh collected a game-high nine rebounds, while Texas State was led by Mason Harrell with a team-best 15 points and five boards.

Arkansas State continues a four-game home stand Saturday, Jan. 14, with 2:00 p.m. contest against Southern Miss.  The game will appear on ESPN+, and every A-State men’s basketball game can be heard live on the EAB Red Wolves Sports Network, including flagship station 107.9 FM in the Northeast Arkansas area.

More here:
A-State Edged 61-58 by Texas State. Article may or may not reflect the views of KLEK 102.5 FM or The Voice of Arkansas Minority Advocacy Council