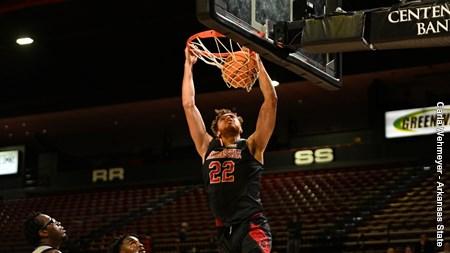 El-Sheikh’s output came on 8-of-12 shooting to go along with 9 rebounds to lead three A-State players in double-figure scoring. Markise Davis added 14 points and 5 boards and Terrance Ford Jr. scored 12 points with 5 assists and 5 steals off the bench.

Jordan Blue and Hector Rosario scored 10 points each as the lone Tigers scoring in double figures.

The Red Wolves surged out to a double-digit lead midway through the first half, aided by a trio of 3-point baskets by El-Sheikh, Davis and Caleb London. Ford then entered and helped push A-State’s lead up to 19 with 11 of his 12 points in the half, ending the period with a trey with 29 seconds remaining.

A-State’s lead ballooned to 26 early in the second half on a dunk by El-Sheikh before an Izaiyah Nelson layup ended a Voorhees 8-0 run at the 11:54 mark. The Tigers pulled within 15, but that would mark the smallest margin the rest of the way, when a 3-point play by Caleb Fields made it 66-45 with 6:48 to go.

El-Sheikh threw down a dunk with 4:18 to go to push A-State’s advantage back out to 23 before Voorhees went on a 6-0 run to make it 71-54, but the Red Wolves countered down the stretch to move back ahead by 23 after a hook shot by Alaaeddine Boutayeb fell through the net with 1:15 remaining.

More here:
A-State Earns Exhibition Win Over Voorhees. Article may or may not reflect the views of KLEK 102.5 FM or The Voice of Arkansas Minority Advocacy Council