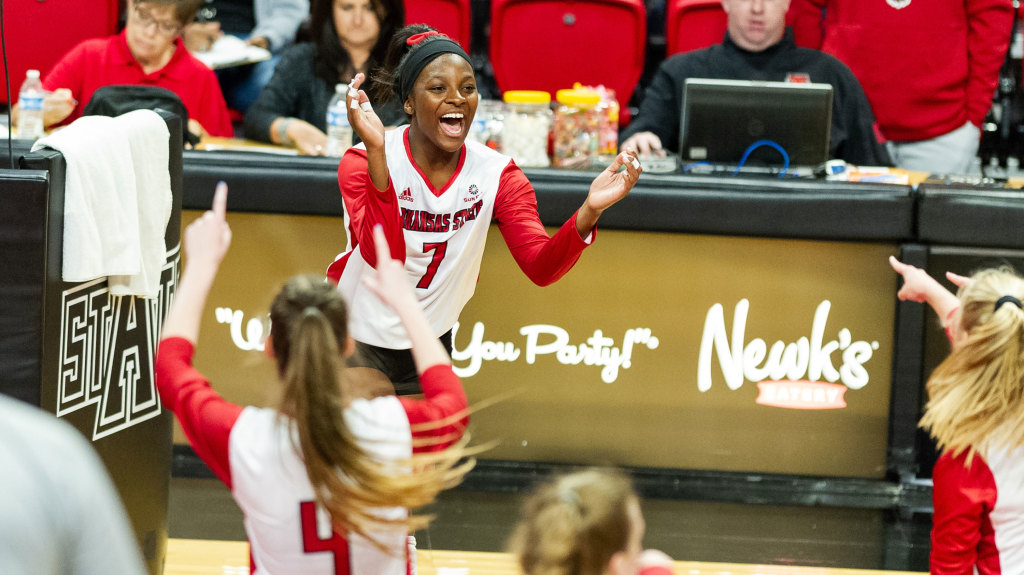 The Red Wolves (12-7, 3-4 Sun Belt Conference) bounced back from a two-match skid with the win over the Trojans (3-16, 1-6), their ninth win in the last 10 meetings between the in-state foes. A-State has now claimed three of its last five outings.

Macey Putt posted a strong night on both sides, recording her fifth double-double of the season with 15 kills and 13 digs, both match highs. The sophomore also fired an ace in the second set. Joining Putt with a double-double performance was Malgorzata Andersohn, who led A-State with 22 assists to go along with 11 digs. Andersohn now has seven double-doubles on the year, tying Peyton Uhlenhake for the team lead. Julianna Cramer added 20 assists to the Red Wolves’ total.

Set 1 – A-State, 25-15
The Red Wolves opened up strong, taking a 3-1 lead out of the gate. Little Rock was able to knot up the set at 7-all, but was unable to take control as a service error and block by Timber Terrell and Josie Stanford made it 9-7. From there, A-State managed to hold momentum and stretch its lead out to as much as 10 at 24-14. A Uhlenhake kill, one of her two in the set, ended the opening set in favor of the Scarlet and Black.

Putt led the way offensively with four kills, while Andersohn paced the offense with seven assists. Defensively, Andersohn also led with five digs and helped the Red Wolves hold the Trojans to a .032 attack percentage.

Set 2 – A-State 25-17
Little Rock opened on a 2-0 spurt to start the second, but A-State responded with a 5-1 run of its own to take a 5-3 lead fueled by three straight Putt kills. The Trojans would battle back to force a back-and-forth set until the Red Wolves distanced themselves with a 5-0 run to make it 19-14. During that run, Putt recorded a kill and an ace, while Davenport tallied a pair of kills to go along with one by Uhlenhake.

A-State would go on to claim the set by taking six of the last eight points, ending on an ace by Uhlenhake.

Putt added to her tremendous day with six kills, while Davenport added five in addition to a block. Andersohn led in assists with 10 with Cramer adding six. Andersohn and Putt both led defensively with five digs. As a squad, the Red Wolves hit .405 in the set.

Set 3 – A-State 25-21
The Red Wolves kept the momentum going, taking an early 4-1 lead in the third set. However, the Trojans would not back down, taking seven of the next eight points to go ahead 8-5.

Little Rock stretched its lead out to 10-7, until the Red Wolves went on a 4-0 run to take an 11-10 lead on a block by Terrell and Stanford followed by a Stanford kill. The set would be back-and-forth for much of the remainder, with the Red Wolves taking a 20-19 lead on a kill by Uhlenhake to force a Little Rock timeout.

The Red Wolves would hold off the Trojans after the timeout, taking five of the last seven points to take the set and match, with Putt fittingly ending the match with two straight kills.

A-State remains on the road for its next two contests, traveling south to Louisiana to take on Louisiana-Monroe (Oct. 25, 6 p.m.) and Louisiana (Oct. 26, 6:30 p.m.) before returning home for a three-match home stand over a five-day stretch against Georgia Southern (Nov. 1), Georgia State (Nov. 2) and Little Rock (Nov. 5).

Original article source: http://www.astateredwolves.com//ViewArticle.dbml?DB_OEM_ID=7200&ATCLID=211814656 | Article may or may not reflect the views of KLEK 102.5 FM or The Voice of Arkansas Minority Advocacy Council